Although birth control pills are very well-known, there are still some questions about them. What are the side effects? When should you stop taking them? We'll tell you all about it. 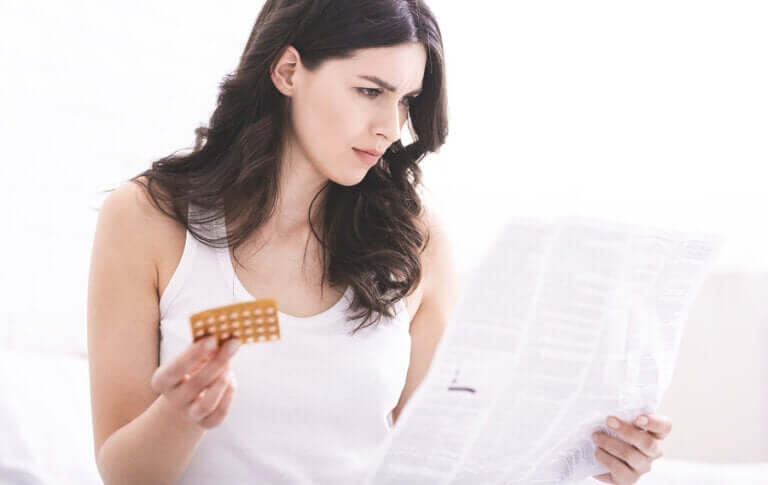 Birth control pills are medications that contain hormones. The most widely-used pills are known as combination pills. They contain both estrogens and progestin. However, there are many different types.

These two hormones prevent ovaries from releasing an egg during the menstrual cycle. This process is ovulation. To do this, natural hormone levels combine with hormones from the pill.

Also, progestin is responsible for thickening mucus from the cervix. Therefore, it’s harder for sperm to enter the uterus.

Although using birth control pills is becoming more common, there are still lots of questions about them. Therefore, we want to share some of the most common ones.

What are the side effects of birth control pills?

Birth control pills are very safe, and there aren’t many side effects. However, as with all medications, they can have some undesirable effects. For example, some of the most common are:

In addition, it’s worth mentioning the possibility of blood clots and heart attacks. An increase in blood pressure and heart problems could also happen. However, these are very rare, and they only happen in exceptional cases.

At what age should I stop taking the pill?

Lots of people think that starting at age 35, it’s not safe to take the pill. However, everything depends on your lifestyle.

In this sense, women over 35 that are active, don’t smoke and follow a balanced diet can keep taking these pills without feeling concerned.

However, women that smoke and don’t lead a healthy lifestyle should stop taking them around that age. In fact, these habits can cause side effects, in addition to making them worse.

What should I do if I want to get pregnant?

If this happens during the first cycle after stopping treatment, it’s normal to not get a period.

How do birth control pills work to prevent pregnancy?

As we mentioned, these pills prevent the fertilization process. That is, they prevent the sperm from reaching the egg and fertilizing it.

To do this, they block the release of the egg from the ovary to the uterus. In this way, the sperm won’t be able to find an egg to fertilize, and it can’t start pregnancy.

Can I prevent sexually transmitted diseases with the pill?

This is a very important question to clarify. The pill doesn’t protect against sexually transmitted diseases. It’s only effective in preventing pregnancy, but doesn’t prevent anything else.

Therefore, it’s still important to use a condom to prevent spreading these diseases. Also, if you use a condom and birth control pills, the chances of getting pregnant are lower.

Is it wrong to take birth control pills during pregnancy?

It’s best to stop taking the pill once you know you’re pregnant. However, lots of people take the pill without knowing that they’re pregnant until they miss a period and take a test.

Although there isn’t a lot of evidence that hormone exposure causes problems for the baby, you should stop taking the pill once you know you’re pregnant.

We encourage you to talk to your pharmacist, doctor or gynecologist about any doubts you have. Finally, remember that it’s always best to use a condom, since birth control pills don’t prevent sexually transmitted infections.