Plant pests and diseases have increased in recent years. The problem is that they threaten food security and can mean major losses for farmers. Do you know the most common types? 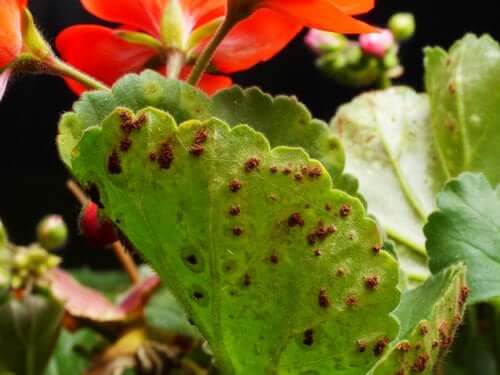 The spread of plant pests and diseases has increased in recent years and, in fact, has reached epidemic proportions. Although it’s a problem that’s receiving more and more attention, not enough strategies have been developed yet to reduce the impact they generate at an economic and environmental level.

Outbreaks and pests are responsible for huge losses of crops and pastures in many countries. Therefore, they’ve also become farmers’ biggest enemies and, in addition, have managed to be cataloged as a threat to the food security of thousands of people.

What are the most common ones? Keep reading to learn more!

Talking about plant pests and diseases can be too long and difficult to understand. Fortunately, we now have a wide variety of information about the parasites, insects, viruses, fungi, and bacteria that can affect our gardens.

This information has been key to understanding how they attack and how best to control them. So, in today’s article we want to share a basic guide on the most common pests and diseases that can affect plants in our gardens and orchards. Don’t miss out!

You’ll also enjoy: How to Make an Urban Garden in a Small Space

It’s the most common parasite and there are several species of it. They usually have a sucking beak that allows them to pierce the leaves and stems of plants to feed on their sap.

They’re linked to deforming the plants and rolling the shoots and leaves. They often affect bean, cabbage, potato, and pea crops, among others.

They’re easy to identify because they have a very peculiar bleached color. They usually inhabit the back of the leaves of the crops and fly away when we move the leaves with our hands.

Their presence can cause premature leaf damage and yellowing of the leaves. They’re common in tomato, bean, bell pepper, onion and cabbage crops, among others.

Its scientific name is Tetranychus urticae. They’re very small red spiders that usually live on the back of the leaves. Their damage is recognizable to the naked eye, as they produce yellowish spots on the leaves. In addition, the leaves dry up and fall off when the pest spreads.

This pest can be found on a wide variety of crops, including fruit trees, garden plants or food plantations such as potatoes, pumpkins, beans and almonds.

They’re tiny insects that can attack all parts of the plant. When they proliferate, they make the fruits, leaves and stems acquire a very particular grayish-metallic coloring. They often also damage the flowers. The most affected crops include:

They’re very common parasites in orchards, especially when the soil is very humid. They can damage the roots and, therefore, also kill the plant.

Sometimes, it’s difficult to recognize them, since the symptoms are similar to those suffered by the plant due to lack of water or nutrients. They often affect eggplant, potato and onion plants.

It’s a type of fungus that is associated with molasses, a sugary substance that can be secreted by aphids or whitefly. It can be identified by the appearance of a black powdery layer on both the fruit and the stem.

In general, they can cause a loss of production because they affect the vigor of the plant. They’re common in potatoes, peas, cabbages, zucchini and peppers.

It’s another variety of fungus that can cause the red pustules to appear on the back of the leaves of the plants. It can deteriorate the leaves until they end up falling off. They often proliferate in beans, peas, and bean crops.

Caused by the Erwinia genus of bacteria, it initially manifests itself as a dull, wet spot on the surface of the fruit. As it spreads, the stain spreads and the fruit ends up rotting completely. It affects a multitude of crops, including potatoes and peppers.

It’s one of the pests and diseases of the plants that produce damage both to the stems and shoots, as well as to the fruits. It’s caused by bacteria of the genus Clavibacter, which produces elongated spots on the stems and circular spots on the fruits. The most susceptible crops include bell pepper and tomato.

To finish this list of plant pests and diseases, we have to mention the tomato mosaic virus. Its name comes from the spots it causes on the tomato leaves, which resemble a mosaic in green tones. It can also affect bell pepper crops.

Did you know about these plant pests and diseases? If you identify them in your garden, find out how to control them. Now, keep in mind that pests should only be eradicated when they damage plants and crops. Always keep this in mind!

Natural Ingredients to Fertilize Your Plants
Natural ingredients such as nettle slurry are traditional methods to nourish plants. They're a great way to avoid the use of chemical products. Read more »
Link copied!
Interesting Articles
Garden and outdoor spaces
Discover 6 Sustainable Garden Tips

A sustainable garden is characterized by the responsible and efficient use of natural resources. These gardens respect the diversity of…

More and more people are opting for terrace gardening. However, a number of mistakes are usually made when we get…