Did you know that a lack of nutrients could affect children's physical growth and neurological development? We'll tell you all you need to know about it in this article. 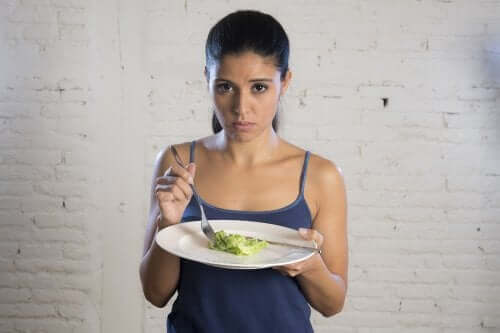 Picky Eater Syndrome is a mental health disorder. Basically, when a person has this disorder, their regular diet doesn’t include a healthy variety of foods and they reject incorporating new elements.

To be diagnosed as a syndrome, a person must have eaten less than ten different foods in total, throughout their diet, for at least two years.

If these criteria are met, then we’ll be faced with this odd pathology. The Diagnostic and Statistical Manual of Mental Disorders includes it as a disease with its name official name: Avoidant/Restrictive Food Intake Disorder (ARFIV).

Picky Eater Syndrome and its relation to other disorders

Who does Picky Eater Syndrome affect?

While the disorder can appear at any stage of life and affect anyone, it usually affects two specific population groups.

The two most affected groups are children and athletes. Let’s take a closer look at each one.

Parents know that with children it’s difficult to incorporate food. Something called food neophobia appears in the little ones: the fear of trying new items in their menu.

Given that, according to this study from the University of the Basque Country (Spain), this usually develops between the ages of two and six and is normal: it’s part of the process of growth and development. Adults should understand that this is something that’s normal in preschool age.

However, when the child takes it to an extreme, we can talk about Picky Eater Syndrome in a child. It’s estimated that about 15% of children under six years of age suffer from it, and it’s usually more frequent among females than males. Approximately, for every boy who has this syndrome, there are four girls who have it.

In addition, the long-term problem is that it can be perpetuated into adulthood. Many times, parents become persistent with the incorporation of food in a counterproductive way and children enter an anxiety cycle that stimulates the disorder even more.

The presence of the syndrome of selective dining in childhood has been associated with certain characteristics of the personality that persist in the adult age:

You may be interested in: How to Reduce Anxiety in Children

When those who play sports become professional or perform them more and more frequently, they run the risk of becoming obsessed. This obsession can become evident in the preparation of the diet, especially if the sportsman or woman only wants to increase their muscle volume or bring their performance to the maximum. They often don’t even think about the price that comes with pushing their body to these extremes.

Menus based solely on proteins are common, and also a diet based on chicken and tuna in the three daily meals with alternation of pasta.

This little variety forces the body to work metabolically in atypical ways. This is harmful in the long term, and can generate metabolic illnesses that will become evident over the years.

The lack of nutrients is specifically serious for the human body. Macronutrients and micronutrients are undoubtedly vital for the body’s cells and tissues to work, develop, grow, and repair.

Minimal deficiencies can affect the healing process, according to the nurse Carmen Carrera, from the Virgen del Rocío University Hospital in Seville (Spain). In growing children, there won’t necessarily be an alarmingly low weight but there may be low height associated with the deficit.

In addition, and as this research from the Institute of Neurology and Neurosurgery of Havana (Cuba) states, children’s nervous systems are unquestionably and particularly sensitive to the syndrome.

There may be a substantial difference in IQ between children who suffer from the syndrome and those who don’t. Of course, this will affect school performance.

The social interference that the disorder has isn’t minor either. People with selective eating syndrome avoid attending social events where there’s food (birthdays, for example).

They know they’ll be exposed in those situations. For that reason, they’re more and more withdrawn and spend more time in solitude, making the possibilities of external help difficult.

When someone has this syndrome, the good intentions of loved ones are not enough to reverse the diet. They’re likely to fail if there isn’t any proper counseling.

In conclusion, it’s a mental health problem, and as such requires professionals in that area. On many occasions, it’s a combination of disorders, so it’s essential to consult psychologists or psychiatrists to characterize the situation.

Sadorexia: An Increasingly Common Eating Disorder
Have you heard of sadorexia? Here we'll tell you all about this increasingly common eating disorder among adolescents that's dangerous to their health. Read more »
Link copied!
Interesting Articles
Illnesses
What Is Cyberchondria and How Do You Deal with It?