Physical Pain and Anxiety, and Their Relationship

Several studies indicate that physical pain and anxiety frequently appear together. This makes sense because the body and the mind aren't two separate entities. On the contrary, they work together and influence each other. Thus, each of these dimensions affects the other even though this correlation often goes unnoticed. 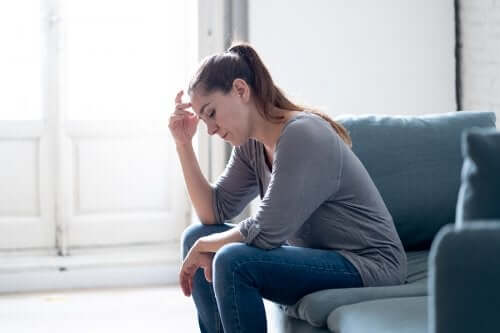 Physical pain and anxiety are symptoms that often go hand in hand. According to a report by the American Psychiatric Association at their 161st Congress, 60% of patients with anxiety also suffer from physical pain. In addition, there’s also depression in 80% of these cases.

In another study in the Journal of Affective Disorders, researchers show that 78% of people with psychological problems also develop organic symptoms, including physical pain.

Even though the figures are evidence in themselves, estimates indicate that in 60% of the consultations doctors fail to establish the link between physical pain and anxiety. This is because a compartmentalized approach predominates, in which they address physical and mental symptoms separately.

Anxiety is currently a very common problem in the population. And, even though it involves emotional disorders, it also has to do with physical symptoms.

Thus, anxiety is an unpleasant state that virtually all people experience, at least momentarily, at some point in their lives. This is because it’s a response to stimuli perceived as threatening. Sometimes these stimuli are real risks and other times they correspond to perceived or imaginary risks.

Excessive simultaneous stimuli also lead to anxiety. Some believe that living in big cities has a high potential of generating anxiety. These environments imply successive states of alert that together generate stress and, ultimately, anxiety.

There’s an imprecise fear when it comes to anxiety, which leads to us creating defensive behaviors. Under this state, there are also organic changes, such as increased heart rate, sweating, and agitated breathing. Obviously, these physiological changes will alter the functioning of our bodies over time.

Read also: Post Traumatic Stress and its Effects on Your Body

A study on physical pain and anxiety

A study that included 1,317 patients, in 80 health centers, published by the General Council of Psychology, shows that 981 of the patients had some level of anxiety.

They established that 59% of patients with anxiety also had physical pain. It’s clear that there’s a close correlation between anxiety and physical pain, but the percentage increased by 19% if there was also depression. The most worrying thing is that, of all of them, only 17% received some type of treatment for their psychological problems.

Many patients have physical pain that doctors can’t find an organic explanation for. Thus, pain ends up becoming the way that some people express their emotional suffering. However, not all doctors admit or recognize this correlation.

The most important thing is to admit that we’re all exposed to anxiety, to some extent. For this reason, we must adopt lifestyles that allow us to find places for relaxation and recreation. Much more if we experience physical pain and anxiety.

Physical exercise is one of the most effective means of restoring the balance of our emotions. A small exercise routine, 15 minutes a day is usually enough to make us feel better. Even better if you combine it with some relaxation practices.

In cases where anxiety is excessive, you must consult with a mental health professional. There are many therapies and techniques that can help you manage emotions appropriately.

How Does Acupuncture Help to Treat Joint Pain?
Do you know how acupuncture can help treat joint pain? Acupuncture is the basis of Chinese medicine and has been practiced for thousands of years. Read more »

Link copied!
Interesting Articles
Illnesses
Do You Know about the Genetic Basis of Cancer?