Perioral dermatitis is a skin disease. It has common symptoms with other pathologies such as rosacea. In this article, we'll tell you about its symptoms and the appropriate treatment. 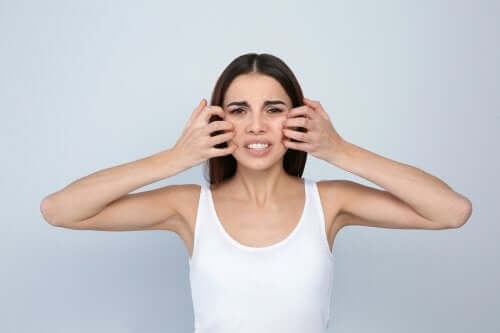 Perioral dermatitis is a dermatological disease that manifests itself intensely around the mouth. This disease derives its name from the location and its main characteristic. Specialists often also call it peribucal dermatitis.

It’s a condition that shares symptoms with other more recognized issues, such as acne, rosacea, contact dermatitis, and even herpes zoster. Hence the importance of proper diagnosis in order to receive correct treatment.

Perioral dermatitis isn’t contagious. The person who suffers from it can’t transmit it to another person through contact. Nor is it a disease that can be classified as dangerous. The major affectation is aesthetic influences quality of life.

The groups which have this disease most often and are most affected are young women and children. An increase in the affectation has been noticed in the last years, mainly in industrialized countries. Moreover, this is associated with the intensive use of cosmetic creams.

The etiology of this disease isn’t clear. Doctors believe it occurs in people with a certain predisposition to skin allergies. The patient’s skin is apparently more sensitive to the action of certain substances which gives rise to the symptoms. The substances that science has identified as triggers are the following:

This disease is also associated with poor facial hygiene, either by lack of proper washing or by the use of soaps that are not indicated. Among infants, of course, parents play a key role in preventing perioral dermatitis through hygiene.

In the case of some women of childbearing age, the hormonal changes of the menstrual cycle are behind the appearance of the symptoms. For them, dermatitis is cyclical and reappears every month with a similar frequency.

A particular situation is in children of pediatric age. In children, saliva around the lips causes the irritation which is the cause of perioral dermatitis. In short, it’s a variant of contact eczema.

The quintessential clinical sign of this disease is the appearance of small red bumps on a sector of dry, reddened skin. Sometimes, these bumps may contain pus.

The location of the lesions is always around the mouth. Mainly affected are the folds of the nose and the folds of the lips. It’s important to mention that about two millimeters of skin adjacent to the lips are usually free of symptoms.

In addition to the skin lesions, patients report pain, burning or itching in the affected region. These aren’t always present and aren’t maintained throughout the outbreak.

Based on the symptoms and manifestations, the doctors reach a diagnosis by carrying out a physical examination. Unlike acne, perioral dermatitis never produces comedones. On the other hand, the difference with rosacea is the location, since it doesn’t appear around the mouth.

A biopsy is rarely necessary. The diagnosis is usually clear from a doctor’s office examination. However, when pathological anatomy of the lesions is required, it’s likely that more aggressive variants of the disease are present.

The overall rule of treatment of perioral dermatitis is basically to avoid the triggers. When the lesions are already present, general measures revolve around removing the possible causative factors. In any case, removal should be gradual to avoid rebound symptoms.

The patient should keep taking these measures in their everyday lives even when the lesions have disappeared, since those who suffered from the disease once have a high probability of suffering it again. Therefore, the measures to keep in mind are:

If the doctor so determines, they can prescribe antibiotics to eliminate active lesions. The most commonly used medications are tetracyclines and erythromycin, either locally in creams or as an oral treatment.

In addition, a treatment option that’s being increasingly studied and applied is the use of pimecrolimus cream with a concentration of 1%. Scientific studies have shown rapid improvement of symptoms in patients who received the cream.

While pimecrolimus is a good option especially for patients with a history of steroid use, the long-term adverse effects of its use must be considered. This is a topic of discussion and division in the scientific community. In conclusion, a professional has to supervise the treatment for all these reasons.

6 Foods to Start Eating for Glowing and Radiant Skin
Healthy looking skin means a healthy body. If you want impeccable, glowing and radiant skin, you should practice the basic measures such as washing, toning and moisturizing.  Read more »
Link copied!
Interesting Articles
Illnesses
Eczema and Stress: How Are They Related?