Whats's the difference between benign and malignant tumors? Malignant tumors are characterized by their ability to spread to other parts of the body through a process called metastasis. 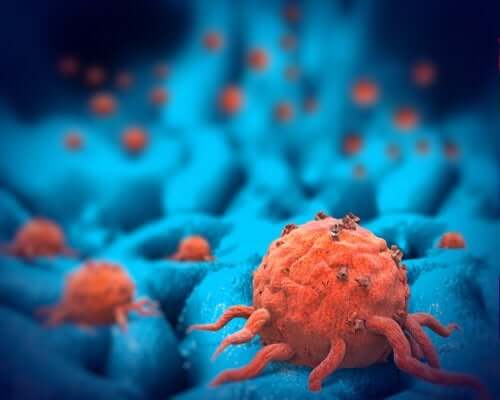 Today, the possibility of having a malignant tumor is a concern that haunts almost all of us. Currently, cancer is one of the leading causes of death in the world. Therefore, it’s normal to experience a fear of suffering from it.

However, you must be aware that not all tumors are cancer. A tumor refers to a collection of cells from any tissue in our body, which have multiplied uncontrollably and have given rise to an abnormal mass.

Due to the importance of the problem, in this article, we’ll explain what the main differences are between malignant tumors and benign ones.

The main differences between malignant and benign tumors

Both malignant and benign tumors are pathologies that require an extensive study by a group of doctors. Similarly, both require an established treatment. This takes place in order to avoid possible complications or greater problems later.

What mainly differentiates malignant tumors from benign tumors is the extension. In both types, the cells multiply uncontrollably. However, in benign tumors, they don’t spread to other parts of the body.

As a rule, benign tumors are not life-threatening. However, there’s a nuance to this, because when they grow too large and press on nearby organs, they can affect them. In such cases, their removal is necessary.

As for malignant tumors, cells have the ability to spread to other areas of the body. In fact, they also tend to grow in those areas, a phenomenon known as metastasis. The spread can occur either by contiguity, by blood, or by the lymphatic system.

In this way, a malignant tumor usually spreads and causes other tumors in different parts of the body. On the other hand, benign tumors usually don’t spread because their cells are surrounded by a membrane or capsule that contains them.


Another aspect that makes it possible to distinguish between a malignant and a benign tumor is differentiation. Differentiation refers to how much the tumor cells resemble those in the original healthy tissue:

It’s also important to know that a benign tumor usually grows more slowly than a malignant one. They can even stop growing. However, in malignant tumors, this doesn’t happen.

What does diagnosing cancer involve?

The sooner the diagnosis of a tumor takes place, the more likely it is for treatment to be effective. Therefore, raising awareness is necessary. Self-examination, in order to look for lumps and abnormalities, is one of the main measures of early detection. However, don’t obsess over it!

In addition, going to the doctor on a regular basis is essential. From a certain age, it’s advisable to undergo general check-ups periodically. These types of measures make up the methods of screening and allow early detection of tumors. For example:

However, the only way to study the tumors in a concrete way is a biopsy, which makes it possible to study a fragment of the tumor. By means of microscopy, it’s possible to observe the behavior of its cells. Thus, we know the degree of differentiation and the rate of proliferation.

The treatment of malignant or benign tumors

Treatment depends on the type of tumor, its location, its extension, etc. Most benign tumors can be removed by surgery. What’s more, they usually don’t require radiotherapy or chemotherapy.

On the other hand, the treatment of malignant tumors is usually more complex. Most combine surgery with cycles of radiotherapy or chemotherapy, even both. This is in order to ensure the elimination of malignant cells in any part of the body.

In the case of any tumor, early detection is key. This will allow for the establishment of a more effective treatment. It’s important because, although benign tumors don’t directly endanger life, early detection prevents possible later complications.