An Overview of the Different Types of Amnesia

Amnesia is a disease that can have multiple causes, from drug use to trauma, to head injuries to alcohol abuse. In the following article we'll look at the most common types of amnesia. 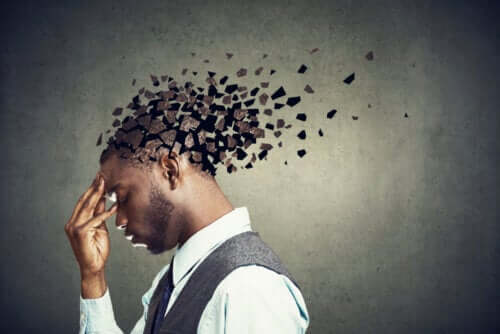 There are various types of amnesia or amnesic syndromes as well as classifications. It’s a disorder characterized by a person’s partial or complete loss of memory. According to diagnostic books, it’s estimated that dissociative amnesia – a specific form – is present in up to 2.6% of some populations.

There are two main ways to categorize the different types of amnesia. The first refers to the chronology of memory loss, that is, what type of information the patient is unable to remember. The second groups them together according to their etiology or, in other words, the underlying cause of the disease.

In general, the origins of amnesia can be organic or functional. Some of the most common triggers are brain trauma and the use of certain drugs, for example.

Types of amnesia according to their chronology

Overall, we can distinguish between two types of amnesia: Retrograde and anterograde Amnesia. It’s important to note that a patient can present both at the same time, meaning these are two complementary disorders.

At the same time, this categorization doesn’t refer to the causes, but the symptoms. The Memory Health Check website provides us with the definitions of these terms.

In this case, the brain doesn’t transfer new events to the patient’s long-term memory. This means that the individual only remembers what happened before the onset of amnesia.

This type of amnesia entails a serious loss of autonomy in daily life, since the inability to fabricate new memories and experiences causes various disorders from an emotional point of view. At the same time, it also entails health risks in the form of accidents. For example, you may forget that you’ve lit a fire shortly after doing so.

Here we’re looking at the other side of the coin, because in retrograde amnesia, the patient doesn’t remember anything that happened before the onset of the disease. According to the International University of Valencia, it’s possible to forget all the information that you collected throughout life before the brain trauma or triggering event.

Types of amnesia according to their etiology

On the other hand, the Cleveland Clinic indicates that we can also categorize types of amnesia according to their etiology. That is, according to the causal agent that triggers the disease. Let’s look at each one of them in detail.

According to neurological studies, traumatic brain injury (TBI) is one of the most common causes of disability and mortality in the world. Data show that there are more than 2.5 million hospital admissions for this type of injury in the United States, which corresponds to 16% of hospitalizations due to falls and blows.

Post-traumatic amnesia occurs as a result of injuries that cause brain damage, but don’t penetrate the skull. This type of disorder is usually accompanied by a loss of consciousness and even coma. Fortunately, memory loss is transient in most cases.

According to the Mayo Clinic, transient global amnesia is a temporary memory loss that can’t be attributed to the most common neurological disorders, such as epilepsy or stroke. The incidence of this disease -that is, the number of new cases in a given place- is about 2.9 to 10 cases per 100,000 people.

Therefore, experts consider it a very rare disorder. Although scientists are still unaware of the trigger of the pathology, they suspect a correlation with the presence of migraines or diseases of vascular origin.

As its name suggests, what characterizes this type of amnesia are lesions in the medial diencephalon. The main functions of this structure are to connect the nervous and endocrine systems, as well as to control the secretion of certain glands.

An example of this type of disorder is Korsakoff’s syndrome. In this concrete case, what determines the loss of memory and faculties is a deficiency in vitamin absorption – generally of vitamin B1 – due to gastric damages from excessive consumption of alcohol.

Childhood amnesia is common to all human beings, as it refers to the inability of adults to remember the first 3 to 4 years of their childhood. Research indicates that the limit of this memory loss is variable and is influenced by both individual and cultural factors.

Amnesia due to Alzheimer’s

Although we’re still unaware of all of the causes of Alzheimer’s -experts even suspect metabolic disorders-, societies such as Elalzheimer.com point out that amnesia is one of the first symptoms of this disease. This condition causes the patient to lose both short-term memory and the memory of immediate events.

According to the San Diego Hospital, some drugs such as flunitrazepam produce anterograde amnesia. This, as we’ve said before, makes it impossible for the patient to remember everything that happened while under the influence of the drug.

Unfortunately, flunitrazepam is known as a rape drug. This is because it’s usually the substance that attackers place in women’s drinks so that they don’t remember what happened and don’t know how to identify the face of the rapist.

In this case, we’re dealing with a type of amnesia that’s an unconscious defense mechanism. Patients who suffer from dissociative amnesia block the personal information that involves a traumatic event.

According to the MSD manuals website, these memory gaps can range from a few minutes to complete decades of life. Hypnosis and facilitated drug interviews can help patients remember the characteristics of the traumatic event.

According to the Medical Dictionary website, paramnesia is an alteration of memory that involves the distortion of memories. These fictitious facts replace real situations, which can’t be remembered.

This type of amnesia appears frequently in cases of chronic alcoholism and organic brain syndromes. We understand them in terms of deja vú and jamais vú. The first expression refers to a situation in which one feels a new experience as if they’ve lived it before. On the other hand, the second describes when a person doesn’t explicitly remember seeing something before.

After a severe concussion that causes loss of consciousness, even for a few seconds, a visit to the emergency physician is mandatory. Some brain injuries don’t manifest themselves immediately, so you should see a doctor as quickly as possible.

At the same time, it’s necessary to emphasize that short-term memory loss is common in the general population. We live at a very busy pace and sometimes anxiety disorders cause us to feel dissociated and confused. Therefore, there’s no need for alarm if you don’t remember something perfectly.

You may be interested in: Five Mindfulness Exercises for Anxiety

The types of amnesia are numerous and varied

As you can see, though it’s a disorder with a simple definition, there are many different types of amnesia depending on the chronology and the causal agent. In general, amnesia arises after a head injury and memory loss is transitory.

Being forgetful is something common in a society full of stimuli. However, when a person forgets integral details of their day to day, feels confused within their own home, or isn’t able to identify their location in a physical space, it’s essential to see a doctor.

The 5 Best Memory Exercises
In this article, we're going to share the 5 best memory exercises to help you have a much more young and agile mind for longer. Let's go! Read more »
Link copied!
Interesting Articles
Illnesses
Eczema and Stress: How Are They Related?