Cocaine users are at significant risk of a nasal septum perforation. Below, we explain everything you need to know about this condition. 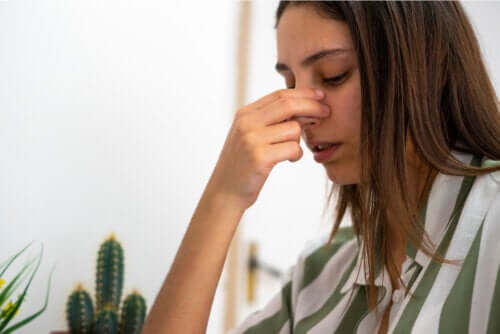 Nasal septum perforation is a condition that affects the nose. In some cases, it may not cause any symptoms. However, it’s also associated with a high risk of complications.

Some of its causes, like cocaine use and certain surgical procedures, such as septoplasty, increase its incidence. Both of these causes are more common nowadays.

Nasal septum perforation may require medical or surgical treatment. In this article, we explain everything you need to know about this condition and how to resolve it.

The nose is a complex structure that’s essential for the breathing process to take place correctly. It has two cavities called nostrils that are responsible for filtering the air that’s breathed in. This way, the air can reach the lungs cleaner, wetter, and warmer, which prevents infection or injury.

The nostrils are separated from each other by the nasal septum. This is a structure that consists of cartilage and bone and vertically divides the nose. It constitutes the inner wall of the nostrils. Thus, it helps channel the passage of air.

Nasal septum perforation consists of the development of a hole. Thus, it causes both nostrils to communicate and, depending on how big the hole is, more or less serious symptoms may appear.

The causes of nasal septum perforation

The etiology of nasal septum perforation is very varied. This is due to the fact that, as it’s a partly cartilaginous structure, it’s sensitive to certain agents that can damage the tissue.

One of the most common causes of this problem is having undergone a surgical procedure in the nasal area. It can appear as a complication of a rhinoplasty, especially when it’s done to eliminate a breathing problem. Rhinoplasty is a surgery that modifies the shape of the nose, both for aesthetic purposes and to improve breathing.

On the other hand, according to the MSD Manual, it can also be secondary to infection or trauma. In fact, continuous nose picking and septum piercings (those that go through the septum) can cause it.

Other causes of this problem

Another of the most relevant causes is intranasal drug use. Specifically, the drug that’s most related to this condition is cocaine. As a study conducted at the Hospital de la Santa Creu i Sant Pau states, it’s currently one of the major causes of this condition.

Cocaine is a drug that causes the blood vessels in the nose to constrict. Therefore, as the tissue doesn’t get enough blood, it becomes damaged and can suffer a perforation.

However, many drugs are also linked to this problem. For example, some nasal corticosteroid sprays. Similarly, oxygen therapy through a mask or glasses.

Finally, another cause of this condition is exposure to chemicals or toxins. This mostly occurs to people who work in chemical industries or factories.

The symptoms will depend on the size of the hole. It can be a very small one, less than half an inch. Or it can be bigger, an entire inch in size.

The most characteristic symptom of symptomatic cases is frequent nosebleeds. The medical term for nosebleeds is “epistaxis”. The bleed can be heavy and alarming because the nostrils are highly vascular.

In some cases, the patient suffers from rhinorrhea instead of nosebleeds. This is the medical term for a runny nose. In addition, it’s common for scabs to form around the hole, which can make breathing difficult.

Also, it’s common for these people to experience headaches or pain in the nose itself. Another characteristic sign of a nasal septum perforation is wheezing. This is when a person emits a high-pitched whistling sound when they breathe. This is because air passes through the hole each time they breathe in and out.

Lastly, this condition can also have aesthetic consequences. According to the Herediana Medical Journal, saddle nose is a malformation that, in most cases, is caused by this condition. It’s characterized by a loss of height of the nose.

This article may interest you: Do You Get Nosebleeds Often? Find Out Why!

There are different ways to treat this condition. The treatment choice depends on the patient’s symptoms and the size of the hole. In many cases, a medical approach will suffice. The medical professional may prescribe an ointment made from bacitracin or mupirocin. This ointment reduces scab formation in the area of ​​the hole.

The patient can also use saline solution, which they administer as a spray. Like the ointment, it helps reduce scab and ulcer formation.

Some cases may require surgery. The doctor may take a tissue implant from another part of the patient’s body. In fact, even artificial membranes can be placed to seal the hole.

The doctors at the Hospital Clinic de Barcelona perform an alternative surgical treatment to reconstruct the perforated nasal septum. For this surgery, they use a flap they harness from the fibrous tissue that surrounds the skull (called a pericranial flap).

Firstly, they make an incision in the scalp, where they harvest the tissue. Then, they make an opening through the frontal bone. After that, they place the tissue over the nasal cavity. This way, they reshape the septum and eliminate the hole.

The benefit of this technique is that it’s painless and has a quick recovery. Also, it leaves no scars. The only scar is in the back of the skull, which the scalp itself covers up.

To diagnose a nasal septum perforation, it’s important for the doctor to know the symptoms and check out the nasal cavity. For this purpose, they can resort to complementary tests that allow them to see the nostrils clearly.

Endoscopy is one of the most widely used tests. It consists of introducing a small tube with a camera through the nostrils. In addition, other tools can also be inserted through this tube to help remove scabs. In fact, doctors can even get tissue samples.

A study published in the Journal of Radiology explains that computed tomography is one of the most useful diagnostic tests, especially in cocaine users.

It’s important to note and remember that, in many cases, nasal septum perforations can be avoided. This is because it tends to occur due to the inhalation of drugs or irritants.

For this reason, in addition to avoiding these types of destructive habits, it’s essential to protect your nostrils if you work in chemical industries or factories. In addition, you should always consult your doctor if you start suffering from any of the symptoms we described here.

Turbinate Hypotrophy: Causes and Symptoms
Turbinate hypotrophy is a benign pathology. However, it should be treated early on to avoid complications. So, what can you do about it? Read more »
Link copied!
Interesting Articles
Illnesses
The Symptoms and Treatment of Granuloma Annulare