My Baby Always Wants To Be Held. Why?

Many mothers wonder why their baby always wants to be held. This article talks about the need for bonding with your baby in order to fulfill their needs. 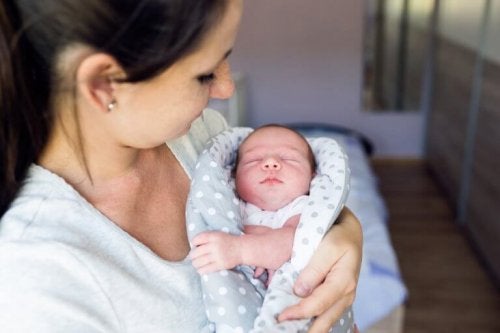 My baby always wants to be held.  Many mothers recognize this.  Some mothers are ecstatic, and others are surprised.

But why is this?

At birth, a baby can’t recognize who their mother is. However, from their first breath, they instinctively sense what they need to survive. The path that connects them to their mother’s uterus tells them the way to their mother’s breast, where they get nourishment.

Babies spend nine months in their mother’s uterus, and at birth they are still immature and depend entirely on their mother to survive. The attachment will be the way to guarantee their well-being from birth until maturity. Love will be the vital force for life.

My Baby Always Wants To Be Held

A mother’s instinct is to nurture her child and spend as much time with him/her as possible.  However, instead of supporting our little one, we often allow opinions to influence us.

Unfortunately, many people will tell us that we don’t need to pick a baby up each time s/he cries.

Many say that if you pick up a baby every time they cry, they’ll learn how to manipulate you. Also, what will happen to their future capacity to be independent?

However, this assumes that a baby understands manipulation or independence. A baby is a mammal, and therefore depends on a nearby mother in order to survive and grow.

Love is the best stimulus to create emotional bonds with your baby and aid in their development. Your baby always wants to be in your arms because affection is a basic  necessity, as much as food or hygiene.

8 Things That You Should Never Do To a New Born

A baby always wants to be held and needs to be close to his mother for at least the first nine months of life. This allows babies to adapt to life outside the uterus. This is the only way to guarantee that bonding will occur.

The baby recognizes maternal love through being close and having physical contact. The baby’s tears aren’t just because they’re hungry, has a dirty diaper, or is sleepy. Babies always wants to be held in mother’s arms because her skin is the main way of feeling their mother’s love. Also, it’s a baby’s instinct to be close to their mother and that’s why every baby always wants to be held.

At the same time, the baby activates instincts of defense and closeness in the mother, because nature also causes mothers to have instincts.

Also read: Why Do Babies Call Their Mothers Nonstop?

Unfortunately, many still insist that the baby has to sleep alone in a room, stick to a strict eating schedule, or that they don’t need comfort when they cry.

We aren’t aware that for nine months, they are sustained by the uterus, and sleep close to our heart. They were continually fed through the umbilical cord and we were always at their side.

In the 1940s, Dr. Rene Spitz, Austrian psychoanalyst, carried out a study that concluded that large numbers of deaths in orphanages were due to lack of love. It compared babies who were isolated in cribs in hospitals with babies raised by their own mothers in a prison.

The babies raised by their mothers grew faster and enjoyed better health. On the other hand, the babies who were isolated grew up with physical and mental deficiencies. Sadly, 37% of the babies in orphanages, who weren’t hugged and cared for by their mothers, didn’t survive.

This thesis of Dr. Spitz was harshly criticized and was doubted for decades. However, in 2007, Science magazine published an essay from Romania to prove the validity of the theory.

They took into account all of the clinical reviews done in reference to the Austrian study. The results were the same. Love is the basis for well-being and development of a baby.

Babies raised in Romanian orphanages who couldn’t be close to their mothers had more problems growing and surviving than the children that were raised in their homes.

“In the same way that my baby wants to be in my arms, I want to always have him with me,” is a mother’s natural instinct. Thus, a mother keeps her baby close to her body because it’s natural.

It’s true that you can’t raise dependent children. They’re incapable of deciding for themselves what to do with their lives. However, it’s hard for us to wait for them to go through each stage of maturity at a given moment. We live in an accelerated world, and like it or not, we speed up the growth of our children.

The nine months of bonding prepares babies for independence. However, independence begins at 2 years old.  It goes through the various stages of independence of childhood and adolescence, and ends 15 to 18 years later.

Holding the baby in your arms is the best to express love for your baby.

How To Help Your Baby Sleep Better
%%excerpt%% When a baby is born, they won't develop a fixed sleep pattern until they're about six months old. Learn what you can do to help your baby sleep better. Read more »
Link copied!
Interesting Articles
Medication
What Does Science Say About Opioids and Opiates?