Microblading Your Eyebrows: Before and After

Microblading your eyebrows is a simple procedure and can last between 6 months and a whole year. Discover more about this pigmentation technique in this article! 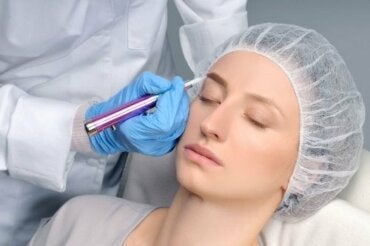 Nowadays, we’ve been discovering more and more aesthetic techniques to beautify the face and to touch-up the areas we’d like to correct or improve. With this in mind, microblading your eyebrows has become popular. This method is based on the micropigmentation of the eyebrows to achieve the desired shape.

Until recently, it was quite complicated to achieve beautiful and natural eyebrows using hair removal and make-up. However, today we have this technique that promises more long-lasting results with a very natural finish.

Microblading your eyebrows to obtain the perfect shape

Well-defined eyebrows can greatly change the features of your face. However, it’s not always easy to achieve the effect you want with makeup or hair removal alone. Also, the latter involves a daily effort when it comes to touching them up.

At the same time, many people suffer from the lack of hair on their eyebrows. This can be due to genetic issues, health problems, or because they’ve waxed too much when thin eyebrows were popular.

What does microblading your eyebrows involve?

Microblading is an innovative micropigmentation technique that allows you to give your eyebrows a more aesthetic shape.

The microblading technique has emerged in Asia as a micropigmentation method. The purpose is to correct or reconstruct the eyebrow–or part of it–when there’s a lack of hair.

Unlike other ancient make-up techniques, microblading involves drawing hair in a thorough, artistic, and natural way. Also, it involves very fine needles, which is why this technique produces such realistic results.

This type of pigmentation is only done on the epidermis and is followed by rapid healing. It’s semi-permanent and can last between 6 months and a year, depending on each person’s skin type, among other factors.

Read also: 5 Tricks to Thicken Your Eyebrows with Natural Products

What you need to know about microblading your eyebrows

Read also: Eyebrows: How to Shape Them Based on Your Face?

Before microblading, you need to be aware of the contraindications. You shouldn’t opt for this technique if you suffer from health problems such as:

In some cases, further complications may occur. However, they’re usually related to an incorrect application of the pigment.

For this reason–and also because it is a process involving needles–it’s essential to go to a good professional and an authorized center. A report from the Madrid Community Health Portal indicates just that.

After microblading your eyebrows, it’s normal to experience some swelling in the area.

If you’ve already decided on microblading, it’s important to be aware of the subsequent recovery phase:

Between 3 and 4 weeks later, your skin will have already healed and will recover completely. At that point, you’ll usually have another session to reinforce the color. The next appointment will be after a year, approximately.

Invest in your beauty

Now you know what microblading your eyebrows involves to achieve perfect eyebrows for a while. From now on, you can forget about tending to your eyebrows every day and simplify your daily beauty routine.

Let’s enjoy these great advances in the world of cosmetics!

Corrective Makeup in Dermatology
Corrective makeup helps with lots of different skin conditions. In addition to having aesthetic uses, they can be used for medical reasons as well. Read more »
Link copied! Next
Interesting Articles
Beauty
Can Cosmetics Irritate the Skin?