Madopar: What Is It Used For?

Madopar is a combination of levodopa and benserazide. It's a drug that's used to treat Parkinson's disease with efficient results for controlling symptoms. 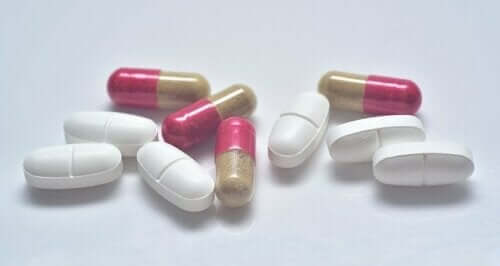 Madopar is a medication that’s used in the treatment of Parkinson’s disease. It’s made up of two active ingredients, 200 milligrams of levodopa and 50 milligrams of benserazide. It comes in tablets with a cross-shaped groove, allowing the patient to cut it to get four doses.

How does Madopar work and what’s it for?

Levodopa is the most effective active ingredient for treating symptoms related to movement and stiffness in Parkinson’s disease.

If you’re taking Madopar you shouldn’t stop taking it suddenly, as you may experience adverse reactions such as fever, muscle stiffness, and confusion.

You may also be interested in: LATE Dementia, a New Type of Dementia

Why does Madopar combine levodopa with other active ingredients?

If levodopa were administered alone, the body would extensively metabolize it before it reached the brain. For this reason, it’s combined with other active ingredients, such as carbidopa or benserazide.

These active ingredients cause a sufficient quantity of levodopa to reach the brain, improving its effectiveness and reducing its possible side effects.

The combination contained in Madopar is in a 4 : 1 ratio of the two ingredients. In this way, they can get an effect practically identical to what they could with high doses of levodopa, but with better tolerance.

In general, all symptoms of Parkinson’s disease improve significantly after treatment with this medication for a time.

How should you take Madopar?

Madopar is a medication you take orally 30 minutes before meals or 2 hours after. If you experience stomach discomfort, you can take it together with food, although you should make sure that the food isn’t rich in protein.

The warning to avoid taking this medicine together with protein-rich foods is because they can decrease the absorption of levodopa.

Madopar tablets release gradually, providing long-lasting action. While you’re taking this medicine you should be careful when driving, since it can affect reflexes.

A doctor will set the daily dose of Madopar in each case, depending on the patient. However, in general, the most common doses are usually the following:

Doctors usually start treatment with half a tablet three times a day, increasing the daily dose by half a tablet each week, until reaching the dose that’s effective in each patient. When they can closely monitor the patient, they can increase the dose more quickly, and they might increase it by one tablet per week instead of half.

Therefore, it takes a short time to reach an effective dose. This effective dose is between 2 and 4 tablets a day divided into three or four doses.

In any case, the daily dose must be divided into three doses, at least, and the doctor will increase an average of three doses of one tablet per day. However, the portioning of the daily maintenance dose depends on what’s most appropriate for each patient.

Another option to establish the maintenance dose may be maintaining the daily dose with the possibility of changing the amount by a quarter of a tablet and taking them more frequently.

Madopar doesn’t heal, but it helps

Currently, there’s no treatment capable of curing Parkinson’s disease, but this medication has managed to alleviate the main symptoms, thus increasing the quality of life of patients.

Madopar is a good treatment option that thousands of people with Parkinson’s worldwide take. It’s important for your doctor to monitor and adjust the doses depending on each case.

Ear Acupuncture Treatment for Parkinson’s
José A. was diagnosed with Parkinson's disease at the age of 65 years and, instead of giving up, he decided to give ear acupuncture a try. Read more »
Link copied!
Interesting Articles
Medication
Varenicline, an Effective Drug to Quit Smoking