Loneliness in Older People: How It Affects Their Health

Loneliness in older people could have a similar effect to chronic stress on the health of their brain. It can also affect their endocrine and immune systems; thus, they're more prone to disease. 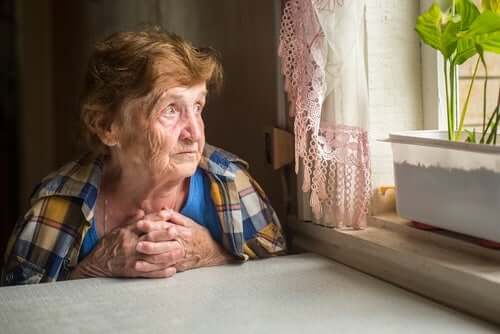 Loneliness is pervasive in older people, and they’re usually the group that’s most affected by it. Unfortunately, Western culture often turns its back on them due to fear. Most likely because many of us don’t want to have to confront our impending destiny.

During moments of sadness, anger, or disappointment, some people would much rather isolate themselves. However, when they’re finally at ease, they recover their need to enjoy some company. They once again need the emotional support of all of those who, in one way or another, can motivate them to keep going.

Few people choose to be alone. This is because being surrounded by people and feeling important to someone is an undeniable human need.

Research reveals that loneliness is a serious health problem and it leads to feelings of worthlessness which, in turn, could lead to premature death. It’s also associated with deteriorating mental health and cardiovascular disease, hypertension, and dementia.

How does loneliness affect older people?

Estimates indicate that 10% of older adults are lonely and that it compromises their physical and emotional health. Also, 70%  of them have a serious health problem associated with loneliness, both psychologically and physically.

At a general level, loneliness influences brain health in much the same way as chronic stress does. Both provoke a negative response from the endocrine and immune systems. Furthermore, this weakens them and, thus, they’re more prone to developing different pathologies.

Pathologies of loneliness in the elderly

According to research, the most common illnesses that result from loneliness are high blood pressure, diabetes, repeated infections, anxiety, and depression.

In older people, the effects are more direct and negative due to the decrease in physiological resilience – that is, the body’s ability to withstand and adapt to adverse conditions. In addition, there’s a reduction in cell repair mechanisms as a consequence of aging.

The most concerning part is that the problem of loneliness in the elderly is on the rise. So, it’ll become a global health problem in just a few years.

For experts in the field, resolving the problem of loneliness can lead to many health benefits for the elderly. In fact, psychologists think that having a social life is the main factor that can ensure a good quality of life.

Company for the elderly

David McCullough, president of the Women’s Royal Voluntary Service Organization, which works with more than 40,000 volunteers who keep the elderly company in the UK, reveals that loneliness and its health consequences are becoming more and more of a concern.

McCullough and his group of volunteers help the homeless as much as they can. Especially senior citizens who, in solitary conditions, are already afflicted by many conditions such as loss of mobility, dementia, and mental problems.

The data revealed in the UK shows that a large part of the elderly population feels either “lonely” or “very lonely,” especially those above the age of 65.

For this reason, the Women’s Royal Voluntary Service Organization works to:

To those who, for one reason or another, are now all alone, any social contact on a day-to-day basis can lessen the effects of loneliness. As you can see, it can improve their health.

Is there a solution?

The type of social activity an older person maintains throughout their life is the determining factor when they’re all alone. In this respect, it’s more difficult to give treatment and support to an elderly person who’s had difficulty socializing all of their life and whose lives are marked by rejection, confusion, or fear.

However, they can resolve every situation they couldn’t before with psychological intervention and personalized treatment.

In addition, support groups, help from their friends, groups for the elderly, and just having a conversation with someone during the day can help them overcome loneliness and improve their health in many ways.

Conclusions about loneliness in older people

In conclusion, older adults can often be lonely in well-developed countries. So, we must mobilize as a society to keep them company and make them feel they’re still an active part of society. They gave us everything, took care of us, worked for us, and sacrificed everything for us, after all.

Every single one of us has a moral obligation to never abandon them. We may be like them one day, and we’d want others to do the same for us. We’ll want people by our side who love us and keep us company as well.

Recommendations for the Senior Citizens During Quarantine
In the article below, we'll outline the recommendations for senior citizens during quarantine, which are more specific than for the rest of the population. Read more »
Link copied!
Interesting Articles
Illnesses
Causes of Postmenopausal Osteoporosis and Treatment