Learn All About the Meninges

The meninges act as a physical filter, cushioning shocks. In addition, they also protect against chemical agents. In this article, we tell you all about them! 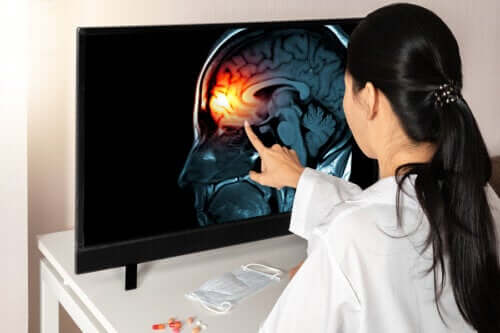 The meninges are a fundamental part of our central nervous system. They’re a set of membranes that envelop both the spinal cord and the brain, whose main function is to protect them from certain attacks.

The word “meninge” comes from the Greek word “meninx”, which means membrane. The central nervous system is one of the body parts that needs the most protection, since, thanks to it, the body can perform all of its functions, such as breathing.

The meninges include the dura mater, arachnoid mater, and pia mater. In this article, we want to explain how they’re distributed, as well as their main characteristics and functions. Also, we’ll talk about meningitis and why it’s such a dangerous condition.

What are the meninges?

As we mentioned above, the central nervous system requires different mechanisms to protect us. Firstly, it’s protected by bony structures, such as the skull and backbone.

But, in addition, it consists of a series of membranes that protect it, above all, from chemical attacks or infections: the meninges. They’re three membranes or layers that are separated from each other by spaces that also contain important structures.

If you start from the outermost part, in contact with the skull, you find the dura mater. It’s attached to the bone and emits a kind of partition that divides the cranial cavity into parts. This way, it keeps the different parts of the brain in place. Also, it contains the venous sinuses.

The arachnoid mater is the next meninge, located in the middle of both. It gets its name because it resembles a spider web. It’s the most delicate and fragile layer. Below lies the subarachnoid space, which contains the cerebrospinal fluid.

The pia mater is the innermost of the meninges, as it’s in contact with the brain and spinal cord. It covers the brain and is introduced through the furrows and convolutions, as if it were a thin sheet that covers it.

The spaces between the meninges

We’ve already mentioned the subarachnoid space, which is the one between the arachnoid mater and the pia mater. The cerebrospinal fluid is inside this area. This fluid protects the central nervous system, cushioning shocks and pressure changes inside the skull.

The functions of the meninges

As we all know, the main function of the meninges is to protect the nervous system from injuries such as trauma. In other words, they’re responsible for cushioning the blows that it may receive. However, they also act as a filter for chemical attacks.

Additionally, the meninges allow cerebrospinal fluid to circulate through the system. In addition to physical protection, this liquid helps eliminate waste produced in the brain. Also, it balances intracranial pressure.

Therefore, the meninges form a support and protection system. On the other hand, they inform the brain of certain changes in pressure, tension, or pain that an injury may cause.

This article may interest you: World Meningitis Day: A Disease that Has a Vaccine

Meningitis is a pathology characterized by acute inflammation of the meninges. Although most cases are due to a viral infection, it can also be due to bacteria or a fungus. It can even be caused by a carcinogenic process or other reasons.

The problem with meningitis is that, in many cases, this inflammation can cause brain damage. In fact, it’s common for it to have permanent effects, such as deafness or alterations of other senses. It can even be deadly.

What you must remember is that the meninges are basic protective structures of the central nervous system. Therefore, it’s very important for them to stay healthy, as an injury can affect the integrity of this system.

What is Meningitis?
What is meningitis? It is a disease, normally infectious, that causes inflammation in the meninges. This causes symptoms like fever, headaches and loss of attention Read more »
Link copied!
Interesting Articles
Anatomy and physiology
Why Are Some People More Sensitive to Pain than Others?