Learn About the Consequences of Almagate Abuse

Almagate is an over-the-counter antacid medication that's used to treat heartburn and associated discomfort. However, you should take it in moderation, and only for a short time. Why is it bad to take too much of it? 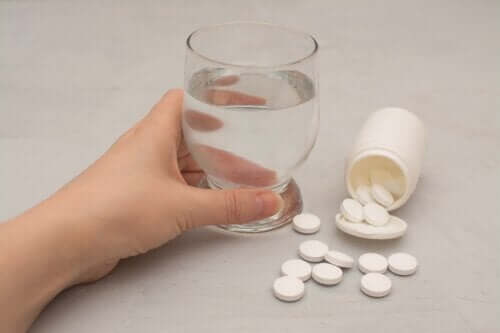 Almagate abuse has become a common phenomenon. Since it’s an over-the-counter drug in pharmacies, many patients see it as the solution to episodes of heartburn or stomach aches. However, it shouldn’t always be your first treatment choice.

What are the consequences of taking too much of this drug? Why should you avoid self-medicating? Although it rarely causes adverse effects, taking too much of it can cause adverse reactions. In this article we’ll tell you all about it.

Almagate is an antacid drug that neutralizes stomach acids in a short time. Therefore, it’s indicated to alleviate the symptoms of heartburn or acid reflux. However, as we already mentioned, the abuse of this drug is a common problem.

What is it made of and how do you take it?

Its formula is based on aluminum and magnesium salts, and you take it orally. It’s indicated only in adults or in people over 12 years of age, in chewable tablets or oral suspension, up to a maximum of 8 grams per day and for a maximum of 14 days in a row.

You should take it separately from other medications by at least 2 or 3 hours, and 1 hour after meals. You never need a prescription to buy it. Hence the importance of being clear about who can’t take this medication and the possible consequences of almagate abuse.

Overdose can be intentional or accidental, and it’s when people use more than the recommended amount of the drug. The consequences of too much almagate has to do with the intake of an overdose of aluminum and magnesium salts.

In general, this happens due to the use of doses higher than those recommended, or by prolonged use for more than 14 days in a row. It’s a drug that people usually tolerate well in correct doses, and only occasionally causes mild diarrhea, which disappears when you stop treatment.

Discover: 10 Things you Need to Know about Antacids

What are the advantages of almagate?

Doctors recommend almagate, due to its low sodium content, for patients with hypertension. It also doesn’t contain calcium, so it doesn’t cause constipation. This is a very common feature of almost all magnesium and aluminum salt carbonate antacids.

What can almagate abuse cause?

In this case, we’re referring to taking almagate in excessive amounts, or for long periods of time. In elderly patients, the excessive consumption of almagate can aggravate certain existing conditions in the bones, such as osteoporosis and osteomalacia, due to the reduction of phosphorus and calcium ions.

Likewise, in patients with diarrhea, malabsorption, or a low phosphorus diet, or in very weak patients, this drug can cause anorexia and muscle weakness, osteomalacia, among other disorders.

With prolonged use, aluminum salts tend to form insoluble phosphates in the intestine, causing them to be poorly absorbed and excreted in the feces.

Almagate is not recommended for patients with kidney failure, whether mild, moderate, or severe. It’s a drug that, despite being over the counter, you must take with caution. We discourage high doses as they can cause an accumulation of aluminum and magnesium ions.

Antacids modify the absorption of many drugs, so, in general, you should take them separately from any other drug. They decrease absorption of the following:

With quinidine, its excretion is decreased due to the alkalization of the urine, which can enhance its toxicity.

Antacids containing aluminum salts shouldn’t be administered to patients with Alzheimer’s disease. Several studies claim that aluminum could contribute to the development of the disease, since it accumulates in the neurofibrils of the brain tissue.

In short, if after 14 days of treatment you notice that your symptoms continue or worsen, it’s important to consult your doctor.

The 5 Best Home Remedies for Countering Stomach Acid
Acid results from stomach acid flowing towards the esophagus. In this article, we'd like to share natural remedies to combat this problem. Read more »
Link copied!
Interesting Articles
Medication
Benefits and Side Effects of Isotretinoin for Acne

Dysgraphia is a neurological disorder that hinders the ability to write. This encompasses the general mechanics of written transcription, i.e.…

Illnesses
The Connection between Hemorrhoids and Pregnancy

Hemorrhoids are an uncomfortable and distressing condition that often afflicts women during pregnancy. They're also known as piles and are…

Health
Anosmia or Loss of Sense of Smell: What Can Cause It?