A knee sprain is an injury often associated with sports, but it's not exclusive to athletes. Learn all about it in this article! 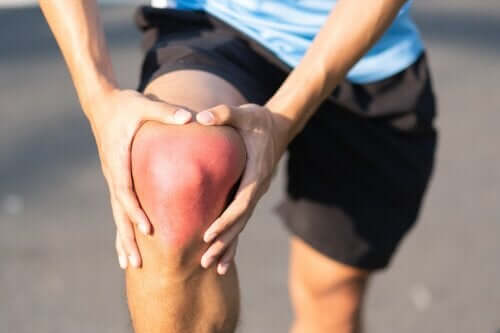 A sprained knee is actually a generic name for other more specific injuries that occur in this joint. A knee sprain as a whole doesn’t actually exist, since its treatment depends on the injured ligament. As a matter of fact, this is a very complex body region, especially in its soft tissues.

Doctors consider it a sprain when the ligaments are stretched beyond what they’re able to handle. They exceed their limit, which results in an injury. This leads to the loss of their characteristic elasticity.

Causes of a knee sprain

Knee sprains have multiple causes, especially if we take into account that each ligament has its particular mechanism by which it is injured. The cruciate ligaments don’t get injured in the same way as the lateral ones.

Athletes are the most exposed and, within each discipline, there’s a greater or lesser risk of distending one or another tissue. But as we’re well aware, it’s possible also possible to suffer an injury in the home and daily accidents.

Think, for example, of a foot that gets caught in a loose tile and, as a result, the lower limb turns on itself. Meanwhile, contact sports such as soccer are at high risk for cruciate ligament injury.

Another common cause is present in frontal motor vehicle accidents that involve tightening of the limbs. In the case of the lateral ligaments, people who play a sport like rugby are prone to sprains because of the side bumps between players.

Degrees of injury of a knee sprain

Knee sprains are classified in degrees, according to their severity. This classification is common in ligament sprains and determines the treatments.

First-degree knee sprain is the mildest form. In general, the person who is suffering from the clinical picture has bearable symptoms that aren’t more than mild pain and a little immobility. It happens when the individuals stretch some fibers of the ligaments, but not all of them. Also, there’s no rupture, so it is unlikely that a hematoma appears in the area.

According to the traumatological classification, this degree of knee sprain implies a rupture of more than half of the ligament involved. The functional impotence is moderate and the activity cannot be continued. The pain is disabling to the point of forced rest.

The most serious form is the rupture of the ligaments. It’s frequently a complete rupture of one of the cruciate ligaments, or the lateral ones. The situation is serious and involves surgery to repair the damage.

The individual can no longer use their knee until they rest and can heal. Hematomas may appear, which indicate destruction.

We can say that pain is the characteristic sign of these sprains, regardless of the ligament involved. What can vary is the location of the discomfort and its appearance by one or another movement. The cruciate ligaments resent the coming and going back and forth, while the others do so with lateral movements

The functional limitation will depend on the degree of severity. In the lighter forms, you can continue walking, although not running. From the second degree, rest is basically mandatory.

The knee and its soft tissues can become swollen. This changes with the position that the person adopts. When the lower limb is extended and raised, liquids are redistributed and, thanks to gravity, they deflate the area.

Fortunately, this also alleviates pain. On the other hand, if the individual doesn’t rest, the inflammation increases and presses on the nerves and arteries.

The hematoma is variable. Ligaments do not have vascularization, so their rupture does not bring about subcutaneous blood flow, although the surrounding tissues do contribute to this. In the second and third-degree it’s common to observe changes in skin color due to blood extravasation.

Possible treatments for a knee sprain

Although the treatment for knee sprains depends on the affected ligament and the degree of severity, some measures are quite common for all forms:

Recovery of a knee sprain

The recovery process for a sprained knee goes through different stages. The first is rest, which is almost mandatory for everyone. Patients should respect this to ensure an evolution that will restore their quality of life.

In any case, it’s necessary to consider the slow recovery of this damage. One month is the standard time, but if you’ve had surgery, it may take twice as long. You might even have to wait much more if you’re thinking about resuming demanding sports activities, which implies a rehabilitation plan that could take from 3 to 6 months.

As far as physiotherapy is concerned, the kinesiologist defines the approach. Mechanical and manual maneuvers can be performed or ultrasound and magnetism can be incorporated. The patient will go to, at least, 10 sessions.

Can knee sprains be prevented?

In the sports environment, the prevention of practice-related injuries is a topic that is mentioned in countless studies. The truth is that knee sprains can be prevented by taking precautions in exercise, warm-up, and muscle exhaustion.

Anyway, there are accidents that, as its name indicates, are simply inevitable. We can reduce the risk of an accident if we have suitable footwear, but that doesn’t eliminate all risks. For example, maybe someone runs into us and there’s nothing we can do about that.

Physical condition is also a protective factor. Individuals with toned lower limb muscles are less likely to suffer a sprain because these tissues function as joint stabilizers.

In the event of pain or inflammation of the knee, it’s advisable to consult a specialist. You may not notice a first-degree sprain when it happens and it may be slowly developing. A timely consultation is another form to prevent the damage from growing and damaging the ligament even more than the initial damage.

Learn All About Kneecap Dislocation
Kneecap dislocation frequently occurs as a result of a sudden change of direction of your leg when you touch the ground. Learn more in this article! Read more »
Link copied!
Interesting Articles
Illnesses
The Symptoms and Treatment of Granuloma Annulare