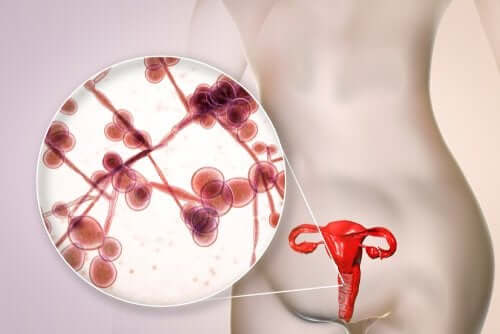 Ketoconazole is a drug that people use to fight fungal infections. Therefore, ketoconazole is an antifungal drug. It belongs to the imidazole family, with other drugs such as clotrimazole, fluconazole, or imidazole.

This drug is orally active, although in Europe it’s only marketed for fungal infections by the topical route. This is due to the risk of hepatotoxicity. It inhibits the synthesis of corticosteroids at the adrenal level and, at higher doses, inhibits the activity of pathogenic fungi.

Some of the fungi ketoconazole is effective on are, among many others:

As we can see, people use ketoconazole to treat Candida albicans infections, as well as those caused by other fungi belonging to this genus. They’re responsible for producing the well-known candidiasis.

Therefore, let’s start by looking at the general characteristics of this infection in order to better understand the effect of ketoconazole, as well as the properties of this drug.

Candidiasis is a fungal infection or mycosis produced by any of the Candida species. It’s not only produced by the fungus Candida albicans, which is the most popular among the general population.

The most common site of infection is the vagina. However, it can also affect other parts of the body. It usually occurs when the body’s defenses weaken and aren’t able to keep the fungi that inhabit these parts of the body under control.

On the other hand, it’s worth mentioning that 75% of women suffer from this infection at least once in their lives, and 50% of them suffer from it recurrently. It’s important to know that it’s not a sexually transmitted disease, although it can be transmitted to the sexual partner, in case of infection.

Nowadays, we have a very effective therapeutic arsenal to treat the symptoms of this infection, among which the following should be highlighted:

How does ketoconazole work in the body?

To do this, it interacts with an enzyme called 14-α-desmethylase. This enzyme is necessary in order to convert lanosterol into ergosterol. Thus, since ergosterol can’t be synthesized from lanosterol, the fungal membrane can’t be created and the fungus dies. This is how ketoconazole fights fungal infections.

Furthermore, as mentioned at the beginning of this article, ketoconazole can also affect the synthesis of corticosteroid substances. In this sense, it’s a very potent drug for inhibiting thromboxane synthesis. Doctors sometimes prescribe it orally to treat Cushing’s syndrome.

For this reason, professionals also use it to prevent adult respiratory distress syndrome, especially in patients at high risk.

When administering this drug, it’s very important to take into account the adverse reactions it may produce, as well as the situations in which doctors don’t recommend its use.

As regards contraindications, it’s a drug that requires an acid medium for its dissolution and absorption, so that in patients with achlorhydria or hypochlorhydria the antifungal can’t reach the plasma levels required to exert its effect.

In addition, the liver metabolizes it, so patients with liver damage may have their problems aggravated by the use of this antifungal.

Doctors also contraindicate its use in pregnant and lactating women. The reason for this is that it falls into pregnancy risk category C, as studies have shown teratogenic effects in animals. Breast milk excretes ketoconazole and may cause nuclear jaundice in the nursing infant.

On the other hand, as for the most common adverse reactions that this drug can trigger, we can mention the following:

Ketoconazole is a drug many doctors prescribe to fight fungal infections. Above all, specialists use it to treat candidiasis which is a disease that affects many women. And remember, candidiasis isn’t a sexually transmitted disease.

Remedies for Fungi: How to Cure it With Natural Ingredients
Fungi are constant threats to the skin of human beings. Fortunately, there are very good natural remedies for fungi that can be prepared at home. Read more »
Link copied!
Interesting Articles
Medication
Characteristics and Uses of Flumazenil