Leishmaniasis is a disease that has a somewhat different type of transmission. Read this article to find out if it's contagious, how it's transmitted, and what you can do to prevent it. 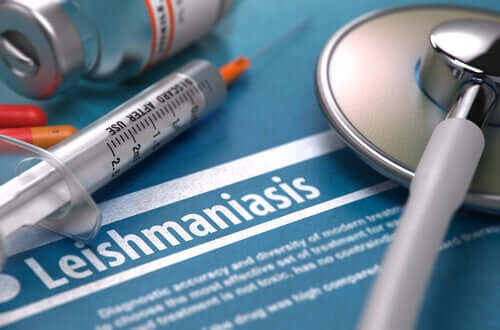 Leishmaniasis is a disease worth learning about. Its contagious characteristic has turned it into a great public health problem. It appears frequently in 88 countries of the world. It affects 14 million people globally, with 2 million new cases each year.

For one, many consider leishmaniasis one of the seven most important tropical diseases globally. Despite that, this disorder is quite neglected and forgotten. According to a study by the National Epidemiology Center, to take Spain as an example, there were 1,359 autochthonous cases spread over 15 autonomous communities between 2014 and 2017.

Leishmaniasis: what exactly is it?

Leishmaniasis is a contagious infection produced by different species of protozoa of the genus Leishmania. These protozoa, also called parasites, are microscopic organisms that need a vector in order to be transmitted.

Now, a vector is an animal that transmits pathogens from an infected person or infected animal to a healthy person. In other words, the disease isn’t spread by direct contact, there’s a second organism that carries the microorganism.

Usually, these vectors are invertebrates, such as mosquitoes, fleas, lice, and ticks. In the case of the pathology we’re talking about in this article, the Leishmania protozoan is transmitted by the bite of the sandfly mosquito.

The mosquito becomes infected when it ingests blood from an infected person or animal. Once inside, the parasite doesn’t cause any symptoms to the vector, it just develops and divides.

When there are a sufficient number of parasites, they go to the mouth and pharynx of the mosquito and are injected at the next bite. The infected sandfly bites another human or animal, injects it with Leishmania, and that’s when contagion occurs.

Despite the human body’s defenses, the pathogen doesn’t die. Instead, it reproduces inside macrophages in the blood and tissues, which end up breaking down and releasing protozoa into the blood, where other macrophages become infected and the cycle continues.

Where are these vectors found?

Sandflies love humidity and heat. For that reason, it’s easy to find them in tropical and subtropical areas. However, it also lives in the Mediterranean basin.

According to the World Health Organization (WHO), leishmaniasis has everything to do with environmental changes. Let’s see some of its risk factors.

Read also: Find out why viruses are getting stronger

What are the symptoms of leishmaniasis?

There are at least 20 species of protozoa of the genus Leishmania that can be transmitted by vectors. Depending on the species and its degree of invasion in the body, people may present different symptoms. Because of that, this pathology has several varieties.

The three common ways are as follows:

How can you prevent catching leishmaniasis?

Leishmaniasis is contagious as long as the vector exists. No one really knows if there’s actually a human-to-human transmission, except for specific cases that have been recorded, for example, with people who share syringes to inject drugs. However, regular blood transfusions are totally safe since they go through many controls.

However, it’s true that there will be more mosquitoes in a place where there are infected people. Evidently, this increases the likelihood that the people around you will be infected. Talking about leishmaniasis as a contagious disease is possible considering the participation of the vector.

Therefore, the main prevention begins with avoiding mosquito bites, especially in people who travel to countries where the disease is common. Let’s see some good tips to avoid bites.

How Can You Avoid Mosquito Bites During the Night?
Getting bitten by mosquitoes during the night is quite annoying. In this article, you'll learn how to avoid mosquito bites during the night. Read more »
Link copied!
Interesting Articles
Illnesses
Can Celiac Disease Cause Infertility?