How to Prevent and Treat Positional Vertigo

Positional vertigo is an abnormality that spontaneously comes and goes. It often requires a simple treatment available at most clinics. 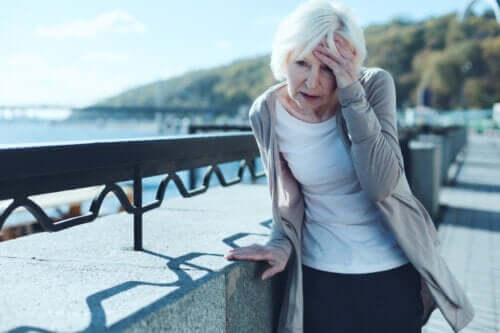 Positional vertigo, also known as benign paroxysmal positional vertigo, is a common condition in people between the ages of 40 and 50. The cause is unknown in up to 50% of cases and often goes away on its own.

One in three people experiences simple positional vertigo at some point throughout their lives. It’s almost always temporary and has no major consequences. The condition was described for the first time in 1921 by Barany and so far there’s no specific treatment for it.

Estimates indicate that 2.5% of the population will experience a severe crisis of positional vertigo at least once in their lives. The incidence increases as people age and up to 9% of people over 60 years of age experience it and require medical help.

This term defines an illusion of movement that comes from within. It’s a sensation of spinning, rocking, body shifting, or shaking. It usually lasts for a short time, but it’s a recurring experience.

Positional vertigo happens when there’s an illusion of movement after moving the head. This type of dizziness is a sensation that ranges from mild to intense. It’s rather annoying but rarely serious.

There are two classifications of general vertigo:

You may also be interested in Motion Sickness: Why Does it Happen?

The basic symptom of positional vertigo is the illusory sensation of movement, which causes a certain loss of balance that most people define as dizziness or lightheadedness. It’s sometimes accompanied by nausea or vomiting, as well as blocked ears, a sense that you or your surroundings are moving, and lightheadedness.

Most often, these episodes happen suddenly and last no longer than a minute. They’re usually triggered when you move your head and vary in intensity. Vertigo can be recurrent, but it may go away for a while and come back later.

Generally, a doctor can diagnose it through a clinical interview accompanied by physical evaluation. They may order tests such as electronystagmography or videonystagmography, and even a Magnetic Resonance Imaging (MRI), if they have any doubts.

How to prevent it?

It’s impossible to determine the cause of more than half of the cases of this type of vertigo. In general, there are no relevant risk factors, but it’s more common in those with a family history or who’ve experienced ear infections or had a blow to the head (even if it wasn’t serious).

Most cases are due to a problem in the inner ear. This is because there are tubes filled with liquid that moves as you move. Sometimes, there are small pieces of calcium floating in the fluid, canaliculi, and the brain perceives their displacement even when you’re still.

This type of dizziness is directly associated with head movements so the best way to prevent it is to avoid rapid or sudden movements of the head. Also, you must avoid stress and the consumption of substances that excite your nervous system.

Keep reading What Are the Symptoms of Vertigo?

How to treat positional vertigo?

There are medications that can help decrease the feeling of vertigo. Also, a procedure called the Epley maneuver can effectively eliminate the symptoms. The objective here is to remove the canaliculi from the ear canals to prevent the sensation of movement.

Most doctors can perform this maneuver that consists of making the head turn to the side where vertigo occurs. Then the patient is to quickly lay back and the symptoms will increase at this point. Afterward, the head is slowly turned in the opposite direction and the body in the same direction.

In the end, the doctor will ask the person to sit down and repeat the exercise. The repetitive application of this procedure leads to the disappearance of vertigo. Note that it may return a few weeks later and require a new application of the technique.

Your doctor can indicate the need and frequency of this procedure but sign up for a complete evaluation if you suffer from recurrent dizziness. Mainly to rule out other more serious causes.

What’s Benign Paroxysmal Positional Vertigo?
Benign paroxysmal positional vertigo is one of the most common causes of vertigo. It makes the sufferer feel that everything is spinning. Read on! Read more »
Link copied!
Interesting Articles
Illnesses
Nipple Discharge: Causes and Recommendations