How Pneumonia Affects the Body

Pneumonia is a frequent illness worldwide, so it's common for people to wonder how pneumonia affects the body. As we'll see in the following article, the affects of pneumonia depend on a number of factors, including the patient as well as the microorganism causing the infection. 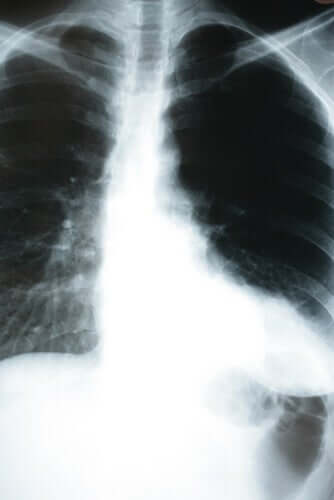 Pneumonia is an infection that affects the alveoli of the lungs. These are small sacked covered in blood vessels that carry out the gas exchange. In other words, they’re responsible for expelling carbon dioxide (CO2) and capture oxygen from the exterior. That’s why the question of how pneumonia affects the body is so important – because this gas exchange is such a vital process.

There are an estimated 2 to 10 cases of pneumonia per 1,000 inhabitants per year. Of those cases, between 20 and 35% require hospitalization. In patients with other illnesses, mortality is 1%, but it can increase to 40% in hospitalized patients, especially those in intensive care. Depending on a patient’s situation, pneumonia can be fatal.

In this article, we’ll explain the process your body goes through from the moment of infection up until illness occurs. In doing so, we’ll reveal how pneumonia affects the body.

How pneumonia affects the body

Pneumonia is the consequence of two separate conditions that occur simultaneously:

How do these microorganisms reach the lungs?

Bacteria, viruses, fungi, and parasites are all capable of causing pneumonia, but bacteria and viruses are usually to blame. Currently, experts are identifying more and more viruses and the causal agents of pneumonia. There are two types of pneumonia that can occur:

You may also want to read: Coronavirus Treatments Currently in Use

Our airways are constantly exposed to microorganisms. Bacterias, viruses, and other microorganisms can form colonies in our lungs in the following ways:

1. Breathing in microorganisms in the throat

The foods that we eat, after passing through the pharynx, should only enter the esophagus. At the same time, only air can enter the larynx. Therefore, we possess a structure known as the epiglottis that closes the larynx and directs food towards the esophagus.

All people have bacterias and sometimes even viruses in our nasal or oral cavities that don’t normally cause damage. However, the larynx, the trachea, the bronchial tubes, and the lungs must remain sterile. In other words, they should not contain any microorganisms because this can lead to an infection. Therefore, as we have explained, only air must enter the larynx.

While we are sleeping, the muscles of the throat and the epiglottis relax, which can allow for microaspirations. This refers to the passing of small contents of saliva, food, etc. from the pharynx to the larynx. These microaspirations can contain microorganisms that, after passing through the larynx, reach the lungs. This is the mechanism that occurs in the great majority of individuals that develop pneumonia as well as healthy people with no illness.

At the same time, some people don’t have adequate control over their epiglottis. This causes them to have massive aspirations of foods, drinks, or saliva towards their larynx. As a result, colonization occurs in their lungs.

You may also want to read: Learn All about Swallowing Disorders

People regularly inhale small amounts of microorganisms from the air, which can make their way to our airways. These microorganisms can come tom an infected person who coughs or sneezes without protection, contaminating those in the area.

This mechanism of infection normally occurs in people with a compromised immune system, also known as immunosuppressed individuals. In other words, their body doesn’t have a strong defense mechanism to fight against infections.

These people may, for example, have bacteria circulating in their blood. Then, these bacteria may pass to their airways, later affecting their lungs. Overall, hematogenous dissemination involves the passing of microorganisms from the blood to the lungs. Fortunately, this type of contagion is very uncommon.

4. As the result of an infection in the pleura or the mediastinum

The lungs are surrounded by a layer known as the pleura. This membrane can become infected and, consequently, the infection can spread to the lungs. What’s more, between the lungs we find different structures that make up the mediastinum, where we find, for example, the lung.

Sometimes this zone can also suffer from infections that can spread to the lungs.

In the hospital, people who are admitted due to other illnesses can end up catching pneumonia. The most common mechanism of contagion of this type of pneumonia has to do with ventilators. In other words, it occurs in intubated patients or those with respirators.

Intubation consists of passing a tube directly from the exterior of the larynx. This prevents the epiglottis from doing its job to keep the airways free of microorganisms. Pathogens from the exterior then find it easier to enter the lungs and cause infection.

Therefore, intubation should only take place in special situations where the life of a patient is at risk and he or she is unable to breathe by any other means.

Normally, if these microorganisms enter the lungs, they are easily eliminated by our body’s defense mechanisms, which include:

How does the body respond?

To understand this better, we’ll use the following analogy. The alveolar macrophages are soldiers on the frontlines of the battle. However, if they realize that they’re losing, they call for reinforcements to help them overcome the enemy. These reinforcements will be the rest of the defense cells.

However, the reinforcements that the macrophages attract can lead to clinical manifestations that are harmful to the host. Therefore, to stop the body from producing this defense response, the patient must receive proper treatment to eliminate the microorganism.

Conclusion: How pneumonia affects the body

In conclusion, we need to understand that the clinical manifestations of pneumonia are not caused by the pathogen agent itself. Rather, they are the result of a person’s inflammatory response.

Therefore, people with a stronger immune system will have more symptoms that a person with a compromised immune system.

8 Symptoms of Pneumonia that You Shouldn’t Ignore
Pneumonia is an infectious disease that attacks the lungs. Find all the information you need in this article. Don´t miss out! Read more »
Link copied!
Interesting Articles
Illnesses
Meningococcal Sepsis - A Serious Disease

Illnesses
5 Types of Hepatitis and Their Main Characteristics