How Much Cheese Can We Eat a Day?

Cheese is food that goes very well with almost any dish and that we always find ourselves craving. But how much cheese can we really eat a day? 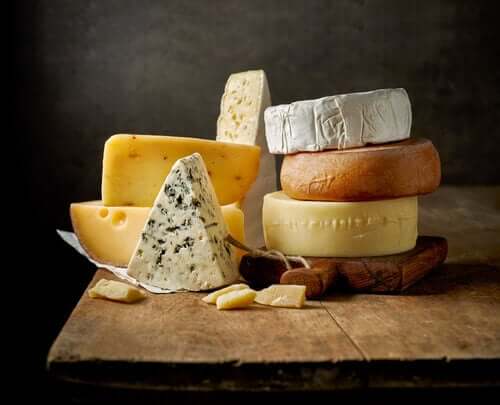 A lot of cheese-lovers may wonder, “How much cheese can we eat a day?”

After all, cheese is a caloric food. It’s rich in cholesterol and it has a lot of saturated fats. As a result, many people eliminate it from their diets.

However, anything is OK in moderation. Let’s take a look at cheese.

What components does cheese have?

Cheese is a food that’s made from milk and it’s been part of the human diet for millions of years. First, the milk is curdled, then ferments are added and it’s left to ripen. Depending on the type of milk, the ferments used and the degree of maturation, we are left with different varieties of cheeses.

The main nutritional components of cheese are:

However, we have to keep in mind that the concentration of nutrients changes depending on the type of cheese we’re talking about.

The more cured the cheese is, the less water it contains. As a result, it has a higher concentration of nutrients: it has more vitamins and minerals, but it also has more cholesterol and fat.

Read more: Everything You Need to Know About Feta Cheese

The main fear of eating cheese: Calories and fat

It’s true that cheese is a food that’s rich in calories and that most cheeses contain cholesterol and saturated fat. Because of that, many people have decided to eliminate it from their diets when they want to lose weight. Also, people tend to stop eating it if they have high cholesterol.

People who want to lose weight or who need to watch their diet for whatever reason should talk to their doctor or nutritionist. That’s because changes in diet should be discussed with your doctor, just like with anything else that concerns your health.

However, it is necessary to evaluate foods as a whole and to stop focusing on just a few particular nutrients. In recent years, new scientific evidence has provided data on eating cheese. And, this information has made us rethink how much cheese we can eat per day.

What does science say about it?

In 2019, the Advances in Nutrition magazine published an article reviewing new scientific evidence about the consumption of cheese and dairy products. Also, it looked at its relationship with different health concerns. The conclusions were:

“Daily salt consumption should be controlled by those with chronic kidney failure or nephrotic syndrome. And, although it seems like it doesn’t have much influence on blood pressure, people with high blood pressure should still talk to their doctor.”

In the same publication, another article stated:

“Dairy products, including cheese, promote better health when consumed in moderation. Eating fermented dairy products, such as cheese or yogurt, is associated with a moderately lower risk of mortality from cardiovascular disease.”

How much cheese can we eat a day?

Although we can eat cheese daily, it’s important to know that cheese isn’t a fundamental food in our diets. Therefore, we can’t equate it with vegetables, legumes, fruits, or eggs, not even as a source of vitamins or calcium. So, it’s not a food that we should be eating whenever we want.

Even though nothing happens if we remove the cheese from our diets, eating the recommended amounts of it shouldn’t cause health problems.

As with most foods, the answer to how much cheese we can eat per day is “it depends.” Individualized dietary recommendations are always stricter than general ones. However, we can establish a guideline and acceptable amount.

When it comes to soft and cured cheeses or those that are more mature, the recommended serving is between 40 and 50 grams a day. This is equivalent to about two wedges or slices since each one weighs about 20 grams.

If we’re talking about fresh cheeses, you can eat up to 100 grams a day. This is the case with mozzarella, cottage cheese, quark, or mascarpone. This equates to about a half-cup. Fresh cheese is usually marketed in small portions of about 75 grams each. So, you can use that measure as a reference.

Tips for eating cheese in a healthy manner

So, when we’re talking about cheese, we can say that, although it’s not essential or a priority food, it’s also not the enemy of a healthy diet.

Take care of your diet by keeping it varied and balanced!

Nutrition
What is Food Safety?