Some people should exercise caution when consuming this type of drinks, as they could harm them. Therefore, it is best to consult with the doctor beforehand. 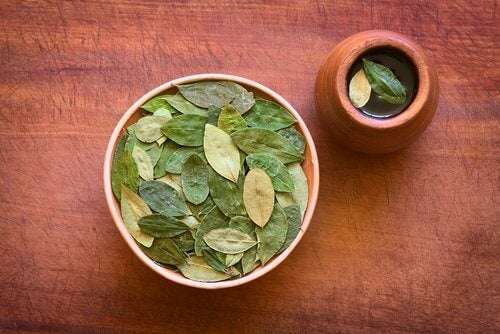 Coca leaf infusion is a popular drink in South America. Originally from the Andean regions where they’ve been consuming it for hundreds of years. People also know it as “mate” or “coca tea.”

This drink has an effect similar to that of coffee; so, it’s a light stimulant, not a drug (such as cocaine).

What is the coca leaf?

The coca leaf (Erythroxylum coca) is native to the Andean areas of Bolivia and Peru, although it has also spread to Colombia, Ecuador, Chile, and Argentina. In these countries, you drink it in the form of “mate” or “coca tea,” which is the infusion of this medicinal plant.

Traditionally, people drink it after a meal to facilitate digestion and they sweeten it with a little sugar or honey. They also consume it as we do coffee, to wake up and continue their activities with energy. This is very useful when walking through mountainous areas or doing sports there.

Coca leaves have and continue to be used in the Andean regions of South America to prevent altitude sickness and certain minor pain. This is because they have a local anesthetic effect.

It is not a good idea to consume coca leaves or their infusion in large quantities. It’s best to try it and, if it’s included in the routine, drink it in moderation and after consulting with a physician.

Likewise, people chew coca in the popular sphere to increase the entry of oxygen into their blood and brain. This is commonly known as coking, acullico or chacchado, which consists of chewing it until you make a bolus that then dries and you can smoke.

But is it legal to consume this drink? Yes, indeed.

Music Therapy Can Help Lower High Blood Pressure
Music therapy can help us to relax and control our breathing. As a consequence, our cardiac rhythm will slow down and our blood pressure levels will come into balance Read more »
Link copied!
Interesting Articles
Medicinal plants
Oregano Essential Oil for Cold Relief