What Is Gene Therapy for the Heart?

Gene therapy for the heart may help repair its functions in people who have suffered a heart attack. What is it though? 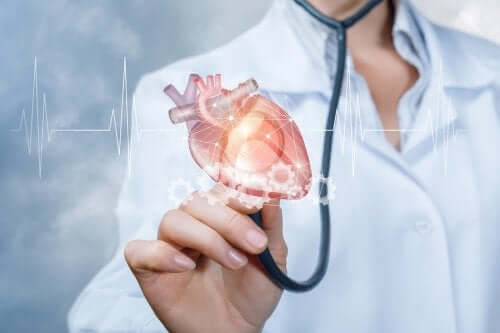 Gene therapy for the heart is one of the most relevant advances in medicine today, providing a new treatment strategy for heart failure. In recent years, research on it has increased considerably.

Gene therapy consists of transferring genetic material into an individual’s cells. The idea is to restore cell function that’s defective or introduce a new function.

The aim of gene therapy is to stimulate the formation of blood vessels. This could help prevent myocardial infarctions or angina pectoris, which are diseases with a high incidence and mortality rate at present.

Therefore, due to its importance, in this article we’ll explain what gene therapy for the heart consists of.

In heart failure, the heart stops pumping blood efficiently. As a result, oxygenated blood doesn’t reach all areas of the body properly.

Despite all the pharmacological advances, it’s a problem that affects more and more people every day. Heart failure can be due to a disease of the coronary arteries, high blood pressure, infections, etc.

Although there are many possible causes, the result at the cellular level is the same. Certain genetic changes occur in the cells of the heart (myocytes) and alterations occur in the contractile proteins in these cells.

This makes it possible to establish treatment through gene therapy for the heart. The idea is to alter the genetics of these cells. In this way, treatment aims at getting the proteins to express themselves in a normal way once again.

Gene therapy for the heart

As we’ve mentioned, gene therapy consists of inserting a gene into a human cell. The idea is to be able to treat a disease. This can be done in diseases whose basis is a genetic defect, such as some hereditary diseases. For example, hypertrophic cardiomyopathy.

But, on the other hand, it can also be useful for certain diseases in which genes are not expressed correctly. In the case of heart failure, research has shown that the expression of certain proteins in the cells of the heart decreases.

This is what leads to hypertrophy of the heart. That is, the heart grows too large and can’t maintain its function. Therefore, it’s unable to efficiently carry blood to all parts of the body.

Gene therapy for the heart can also be useful in the regeneration of the heart after a heart attack. In this case, it’s a matter of “regenerating” the tissue. This takes place by stimulating the multiplication of cells.

You may be interested in: 6 Tips to Prevent a Heart Attack

So, what’s gene therapy for the heart?

Recently, researchers at a New York hospital have tested a gene therapy for the heart that helps it regenerate after a heart attack. They’ve done so in animals, but the idea is that soon it’ll be possible to use it in people.

The team at Mount Sinai Hospital observed that some animals regenerate their hearts after damage. For example, salamanders are able to multiply their heart muscle cells.

In humans, when injury to the heart tissue has occurred, it produces a fibrous tissue. That is, a scar forms where the injury was, which is unable to beat.

However, if the cells of our heart could multiply, the heart could regenerate and beat normally after a heart attack. The gene that’s related to this ability to multiply is called cyclin A2.

These scientists demonstrated that, after injecting this gene into some animals after a heart attack, six weeks later, new cells with the capacity to contract had formed. This is a type of gene therapy for the heart.

Furthermore, after this, it was shown that the heart’s contraction force had increased. This indicated that, after gene therapy for the heart, they had succeeded in getting the heart to pump blood correctly again after a heart attack.

Gene therapy for the heart has a very promising future for medicine. Through this research, it’s been shown that, by injecting certain genes, the heart can repair itself after a heart attack or in the case of heart failure.

Therefore, it’s important to promote research. In short, all these types of treatments can help us in the future to improve our quality of life and life expectancy.

How to Eat Healthy to Keep Your Heart Healthy
There are certain foods that help keep your heart healthy, especially those that contain Omega 3 fatty acids. We'll tell you more in the article to follow. Read more »
Link copied!
Interesting Articles
Treatments
Advantages and Disadvantages of LASIK Surgery