Garden Rhubarb: Benefits and Side Effects

Garden rhubarb is well-known due to its medicinal properties. For instance, it can regulate cholesterol levels and improve digestion. It has many other uses as well as some side effects, however. Keep reading to find out more about them. 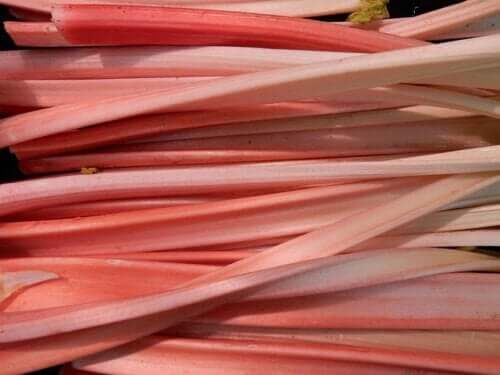 The scientific name for garden rhubarb is Rheum rhabarbarum. It belongs to the Polygonaceae family. It’s also edible and you can incorporate its stem into a wide variety of recipes.

Have you ever heard about the many health benefits of this plant?

In ancient times, the plant was mainly used for medicinal purposes, its dry roots in particular. Currently, people use the stems in sweet soups, jams, sauces, cakes, crumbs, and wine. Also, it’s the main ingredient in many traditional cakes and pies in the UK and North America.

The nutritional benefits of garden rhubarb

We must mention that rhubarb doesn’t have too many essential nutrients and its caloric intake is low. Despite this, making it a part of a healthy varied diet can help complement your nutrition needs.

According to information collected in the US Department of Agriculture database, a 3.5 ounce serving of rhubarb contains the following:

Rhubarb also contains some calcium. However, it’s usually present in the form of calcium oxalate antinutrients. Despite this, the body cannot efficiently assimilate it.

It may interest you What Are the Evidence-Backed Benefits of Elderberry?

The health benefits of garden rhubarb

You must know scientific studies have still not obtained enough solid evidence on the health benefits of rhubarb. However, anecdotal data and non-official research suggest it may contribute to the prevention of disease.

It may help balance cholesterol levels

Rhubarb stalks significantly contribute fiber to a diet, which is well-known for its ability to help regulate cholesterol levels.

In fact, in a controlled study published through the Journal of the American College of Nutrition, the stalk of this plant helped reduce total cholesterol by 8% and bad cholesterol (LDL) by 9%.

As per a publication in Research in Pharmaceutical Sciences, antioxidants play an important role in the prevention of chronic diseases. Not only do they lessen the negative effects of free radicals, but they also strengthen the immune system and work as an aid against inflammation.

Rhubarb is a considerable source of antioxidants – even higher than kale, according to a study published by the International Journal of Food, Science & Technology. Specifically, this plant contains anthocyanins, which contribute to your cardiovascular, brain, and skin health.

The fiber in the rhubarb stalks also has a positive effect on digestive health. Professionals believed its regular consumption can help prevent and treat some gastrointestinal disorders such as constipation.

Also, a study conducted in mice, published in BioMed Research International, mentions that rhubarb tannins help regulate the absorption of water in the digestive tract, which prevents diarrhea.

The side effects of garden rhubarb

In the majority of healthy adults, moderate consumption of rhubarb doesn’t have negative consequences. However, we must be clear on the fact that it’s one of the most significant edible sources of calcium oxalate. This mineral is mainly present in the leaves of this plant. Thus, you must avoid eating too much of it.

As detailed in a report published in BMC Nephrology, too much calcium oxalate can lead to hyperoxaluria, a common cause of kidney stones. Furthermore, it can lead to kidney failure if not adequately treated.

Thus, anyone with kidney disorders or a history of stones must avoid eating this vegetable. Also, consult your doctor before consuming it regularly if you’re following a pharmaceutical treatment.

How to take advantage of garden rhubarb

Introducing rhubarb in your diet is relatively easy, despite its sour taste. Some people mix it with strawberries to obtain a sweet and sour flavor. Also, you could also eat it raw, although it won’t be as tasty as when you eat it in a pie! In general, this vegetable is usually mixed with oatmeal, salad dressings, chia seed pudding, and pies, among others.

What do you think? Are you ready to try it?

Use Rhubarb to Naturally Improve the Health of your Thyroid
This article will focus on exploring the benefits that rhubarb has on the thyroid gland to help you have a healthier thyroid. Read more »
Link copied!
Interesting Articles
Medicinal plants
The Characteristics of Moringa Oil and Its Uses