Four Tips to Prevent and Manage Tantrums in Children

Tantrums in children can lead parents to lose their temper and respond inappropriately. However, they're a normal part of children's growth. Find out why they occur and how to handle them. 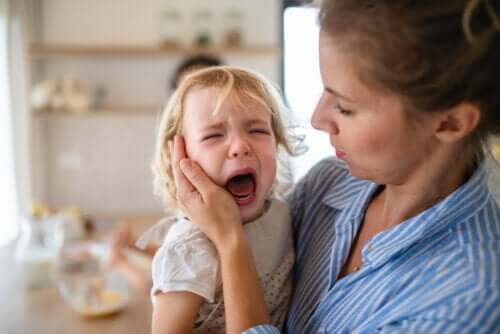 The “terrible twos” are one of the most feared ages by parents. After all, it’s the time when children throw the most tantrums!

The most common forms of tantrums are screaming, crying, hitting, refusal to obey, and even resistance to parental instructions. A lot of difficult behaviors arise at this stage and can certainly be disconcerting and challenging for even the most patient parents.

Leaving the playground, getting in or out of the bathtub, brushing teeth, getting dressed… Pretty much any daily activity can trigger a tantrum!

It’s easy to lose your temper and react inappropriately if you don’t understand who is going on. It’s for this reason that we’d like to explain why children have tantrums and what you can do to prevent them.

The stage in which children throw the most tantrums

Tantrums are a normal and healthy part of children’s growth and are related to their cognitive and social development. Up to this point, the child plays a passive role and just pretty much lays there and allows adults to meet all of their needs. Moreover, they haven’t yet been able to perceive themselves as independent beings, with their own desires and interests.

It all changes around the age of 18 months. This is because the child becomes self-aware and wants to express themselves and become autonomous.

They “know” exactly what they want but have no control over their own life. Moreover, they don’t have the tools to express themselves. Thus, they can’t help but throw a tantrum in protest for not being able to satisfy their desires.

Tips for preventing tantrums in children

This stage can last until the fourth year of age but every child is different. Their own personality and how parents handle tantrums are decisive.

Keep reading for some guidelines to prevent them!

You may have noticed that your child is more likely to have a tantrum when hungry, tired, or overstimulated. So you can take some steps to prevent tantrums related to these.

First and foremost, try to establish a schedule and routine in your child’s life and stick to it. Try not to exceed mealtime or naptime and adjust all other activities to these basic needs. Always carry a snack in your purse in case the child gets hungry.

It’s normal for children to not wanna leave an activity they find enjoyable when they’re immersed in it. This is why you must give them notice about five to ten minutes in advance before you want to leave the park or have them sit for dinner.

They may still resist, but it’ll be easier for them to get used to the idea if you let them know ahead of time. They’re perfectly capable of understanding this.

Many tantrums arise when adults try to impose their will. Remember that your child is beginning to define their character and wants autonomy. There’s nothing wrong with giving them the freedom to decide a few things that concern them.

At least, give them several options from which to choose within your limits. For example, let them decide in which cup they want to drink milk for breakfast, which show they’d prefer to watch and which shirt they’d like to wear.

Let them know that some decisions are non-negotiable, such as buckling up in the car or wearing clothes when they go outside. Just try to be as flexible as you can.

Tantrums occur because children don’t yet know how to manage and express their feelings adequately. For this reason, it’s useful to teach them emotional intelligence.

Also, acknowledge and validate your child’s emotions. Let them know that you understand how they feel and that they have the right to feel it. This way, they’ll be able to express their feelings and won’t have to express them by shouting at you.

Extra considerations about tantrums in children

The above guidelines can help prevent the onset of tantrums. However, what are you supposed to do if they’re already throwing one?

Well, first of all, stay in control of your emotions and be particularly careful about what you say.

Always keep in mind that the child isn’t trying to humiliate you in public; they’re just unable to control their emotions. Opt for empathy and be loving and patient but make sure they don’t harm themselves or others with their actions.

Mainly, the key is to allow them to express themselves and lovingly be there for them when the drama is over.

Did you know that Childhood Boundaries Are an Act of Love?

Tantrums can be a challenge

Tantrums are hard and challenging for parents, but children also experience frustration and lack of resources to express it. The task of adults is to be loving and respectful. Thus, being a positive example for the little ones.

Yelling or physical aggression will only create resentment and damage the emotional bond and emotional development of the child. It won’t provide any learning and certainly won’t end tantrums.

Five Tips to Prevent Temper Tantrums in Children
Temper tantrums are part of children's emotional development. The good thing is that you can help your children by avoiding situations that trigger them. Read more »
Link copied!
Interesting Articles
Children
The Signs of a Spoiled Rotten Child