Although the data is still scarce, we know that there are a significant number of allergies to food additives. It isn't simple intolerance and can cause immune reactions that could be life-threatening. 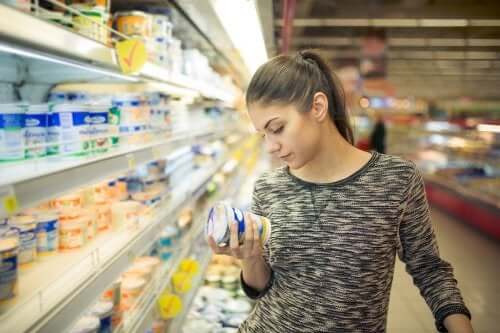 Allergy to food additives is a problem that often goes unnoticed because people can confuse it with food intolerance. These are different phenomena, however, even though both have a common origin and similar symptoms.

When it comes to food intolerance, the digestive system becomes sensitive because the person has difficulty assimilating a food or food additive properly. In regard to food additives allergies, and to food in general, the immune system reacts disproportionately to it. This can, in fact, be life-threatening.

The population, in general, pays more attention to food intolerances or food allergies than to food additive allergies. This is because the latter are present in most processed foods and those who consume them ignore their harmful potential.

Food additives are substances added to foods during their processing. They modify them in terms of flavor, texture, color, aroma, or shelf life, among others. Manufacturers add these substances with the approval of the FDA or other health authorities and usually list them on the product label.

Allergy to food additives occurs when the body identifies them as potentially dangerous. Thus, it creates an immune reaction to attack the substance with symptoms that can range from mild to extremely serious.

Discover: Fruit-Flavored Drinks – Everything You Need to Know

Symptoms of allergies to food additives

Allergies to food additives usually have symptoms in the respiratory system or on the skin. In more severe cases it leads to a serious reaction known as anaphylaxis.

The symptoms of allergy to food additives can vary. However, the most frequent are those of a respiratory nature, especially asthma and rhinitis as well as cutaneous. They mainly appear as urticaria and other forms of dermatitis.

As mentioned above, symptoms can also evolve to generate a serious reaction called anaphylaxis, which is life-threatening. This happens quickly and violently and it’s due to the massive release of histamine and other substances. In addition, it constricts the airways and could lead to death.

Presently, researchers believe that between 5 and 10% of cases of chronic urticaria are due to allergies to food additives. The figure could be higher, however. In fact, there are currently several limitations to the diagnosis of this problem. But, in general, intolerance to certain foods can be a suspicious signal that an allergist should review.

The potential risk of some food additives

All food additives can cause adverse reactions but some of them have a higher potential risk. They are:

Be sure to read: Nitrite Additives in Hot Dogs are Carcinogenic

To control food additive allergies you must avoid the processed foods that contain them. Instead, opt for fresh, natural foods free of pesticides.

There’s no effective treatment for these kinds of allergies with the exception of eliminating them from your diet. However, this could be somewhat difficult as there are many foods with additives on the market.

It’s made more difficult by the fact that additives aren’t always listed by name but by a reference number. It’s important to research the name of the components that correspond to a number or code listed in a food label. The best measure, then, is to avoid packaged processed food, especially those of industrial origin.

The less industrially processed a food is, the fewer additives it’ll contain. The best diet is the one where you eat only fresh and natural ingredients. In addition to this, you must avoid the consumption of food in which the nutritional information is shady. We recommend that you simply refrain from even trying them in such cases.