Everything You Should Know about Hypochondriasis

With hypochondriasis, people feel like they're ill all the time. In this article, we'll explain what it is and some treatment options. 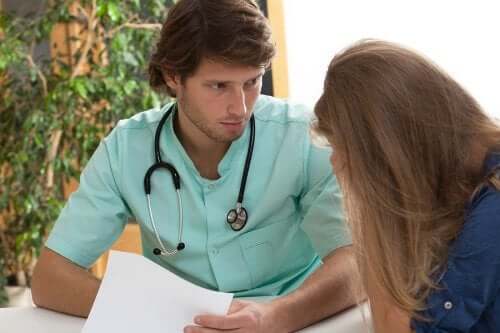 Hypochondriasis, or hypochondria, is also known as a somatoform disorder. It’s a psychological clinical situation where someone thinks they’re suffering from a very serious pathology. In addition, they worry excessively about their health, afraid that they’ll get sick.

Therefore, these concerns make hypochondriac patients think any sign or symptom, real or imagined, is a serious problem. As a result, their state of health becomes an obsession.

To varying degrees, hypochondriasis affects up to ten percent of the population. Also, it’s more common in family environments where one or more members suffer from it. Although hypochondriasis isn’t genetic, there are some families that are more aware of it than others.

Historically, the definition of hypochondriasis dates back to ancient Greece. In fact, the students of Hippocrates, considered the first doctor, described it in their treatises. Often, they linked it to states of melancholy and sadness.

This connection to depression isn’t wrong. In addition, it’s also connected to states of anxiety and anguish. Although they’re not the same, these symptoms can often show up together.

Also, it’s important to differentiate hypochondria from pathophobia. In pathophobia, the people are scared of having a serious illness, so they avoid medical consultations at all costs. This is because they think the results will be tragic.

On the other hand, hypochondriacs go to the doctor more often to get more tests because they’re convinced that they have a disease that doctors need to find. They go through different professionals to find a diagnosis. Generally, they never receive one.

The makeup of hypochondriasis

People with hypochondriasis have certain characteristics and components in common:

Keep reading: What Should You Do for an Anxiety Attack? 4 Tips That Help

Like any disease, we know that there are factors that make someone more likely to suffer from hypochondriasis. These are the so-called risk factors. However, this doesn’t mean that these factors will make someone a hypochondriac, but they contribute to it.

One of the risk factors is having a close relative experience bad medical errors. Then, they feel like doctors can always make mistakes and miss serious illnesses.

As we already mentioned, the family environment is also a risk factor. There are hypochondriac families where, since childhood, people receive messages about the severity of diseases and symptoms. Also, there are families that overreact to certain signs of common illnesses.

Both the family environment and the surrounding social environment can make people believe these wrong things about their health. They often think that something minor is very serious.

For hypochondria, the most effective treatments are cognitive-behavioral psychology therapies. Of course, this is true as long as they’re carried out by professionals trained in this area.

The goal of therapy is for the person to be able to free themselves from the anguish generated by the obsession with disease. Also, the goal is to lose the obsessive practices. You have to achieve a daily routine where not everything revolves around the possibility of getting sick.

In general, cognitive-behavioral therapies offer the patient tasks to perform. For example, this includes limiting medical consultations and not talking about diseases so much.

Treatment can advance if there’s support from the person’s inner circle. Otherwise, it’s very hard to make progress. The support from close family and friends is practically the key to successful treatment.

Hypochondria and Coronavirus: What You Should Know
Hypochondria and coronavirus are a combination that require the understanding and guidance of a psychotherapist. Learn more in this article! Read more »
Link copied!
Interesting Articles
Illnesses
Cancer During Pregnancy: What You Need to Know

Interesting Articles
Treatments
What Are the Risks of Knee Surgery?