Diagnosis and Treatment for Viral Pharyngitis

Viral pharyngitis is an inflammation caused by a virus. It's a common infection and doesn't cause complications which in most cases. The symptoms only last a few days. 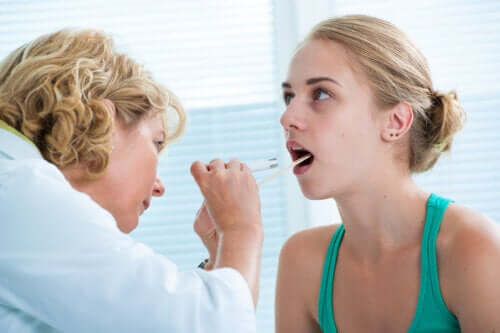 Viral pharyngitis is the most common form of this disease. In fact, between 60 and 80% of cases are viral in nature. However, people use antibiotics and this is a bad practice. This is because this type of medication only works against bacterial conditions.

Typically, this form of the disease occurs more frequently during cold fronts or seasons. It’s a contagious infection, so the best preventive measure is to avoid contact with someone who’s already sick.

Inflammation of the lining of the pharynx caused by a viral infection is known as viral pharyngitis. The pharynx is an anatomical tube-shaped structure that connects the oral cavity with the larynx and the esophagus. It’s in the neck and measures about 6 inches in an adult.

You must take into account that the pharynx can become inflamed for various reasons. Sometimes it happens because there’s a bacterial infection or the presence of a fungus. In addition, there are no pathogens in up to 30% of cases.

Therefore, viral pharyngitis is only caused by a virus. The course of this disease depends on the type of virus involved and the management of the pathology. Only in rare cases do complications occur.

Learn to make some Homemade Natural Remedies for Pharyngitis

Viral pharyngitis is usually associated with a viral infection. In other words, it’s one of the symptoms of another infectious disease. When this inflammation manifests without the presence of another pathology, it’s referred to as nonspecific viral pharyngitis.

The disease usually has a gradual onset and causes little damage in the latter case. Normally, it will resolve in two or three days. In other cases, the viruses and associated pathologies are usually:

The hallmark symptom of this disease is a sore throat. In addition, there are other manifestations that can occur with greater or lesser intensity, depending on each person. They usually manifest as:

Symptoms can vary, depending on the type of virus causing the disease. In acute viral pharyngitis, the pharynx appears red and covered with mucus. Similarly, in the chronic, the mucosa is pale, thin, and covered by thick mucus.

In general, the diagnosis is clinical and based on the history and physical examination of a patient. Doctors will order tests such as a rapid streptococcal antigen test in order to rule out bacterial pharyngitis in a few cases.

Try out these Homemade Natural Remedies for Pharyngitis

How to treat it?

There’s no specific treatment for viral pharyngitis. Home remedies such as gargling warm salt water are often effective in these cases. It consists of diluting a little bit of salt in a glass of warm water and using it to gargle three times a day.

Drinking a lot of water is also helpful as it cools down the throat and also helps the body get rid of viruses. It’s best to eat a bland diet, rest, and avoid irritants such as tobacco and spicy foods.

In addition, it’s important to refrain from taking antibiotics when the pharyngitis is viral. These aren’t helpful at all. On the contrary, it strengthens the bacteria and makes them resistant to such drugs.

Pharyngitis rarely presents complications. However, there’s evidence that pharyngotonsillitis has become more aggressive in recent years. This is a form of pharyngitis that affects the tonsils and is also caused by viruses in 80% of cases.

How to Treat Pharyngitis Naturally
Apple cider vinegar is one of the most effective ways to treat pharyngitis naturally by killing off the bacteria that causes it. Read more »
Link copied!
Interesting Articles
Illnesses
Risk Factors for Mouth Cancer