Description of Phlebitis and Its Symptoms and Treatment

The main characteristic of Phlebitis is due to the appearance of a clot in one vein or a group of veins, be it superficial or internal. Treatment is usually quite simple but requires promptness. 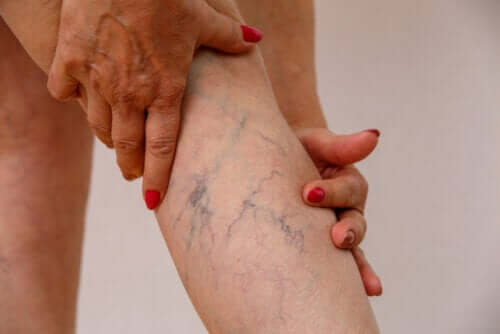 Phlebitis, also known as thrombophlebitis, is an inflammatory process resulting from the formation of a blood clot that blocks one or more veins, usually in the leg. In addition, there are two main types: superficial (near the outermost parts of the skin) and deep (inside a muscle).

According to professional medical portals, superficial thrombophlebitis is a fairly common condition. In fact, estimates indicate that 3 to 11% of the general population experiences it at some point throughout their lives. However, it’s more common in women over the age of sixty.

As mentioned above, there are two types of phlebitis: superficial and deep — the latter is also known as deep vein thrombosis (DVT). Thus, the clinical signs vary depending on the type. These are the general symptoms, according to the U.S. National Library of Medicine:

In addition, superficial thrombophlebitis manifests as red skin and the appearance of a hard red cord under it, tender to the touch. However, DVT is less obvious, its main characteristics are usually pain and swelling.

Learn about Venous Thrombosis Due to Contraceptives

Phlebitis occurs when a blood clot settles in one or more veins and produces swelling. The Mayo Clinic and other sources mentioned above reveal the most common causes of this disease. Among them:

In general, blood clots appear when something slows down or changes the flow in the veins. Any condition with this side effect (from obesity to certain surgical processes) could lead to superficial or deep phlebitis.

A health care provider can usually diagnose a patient based on the appearance of the affected area. However, they’ll have to conduct blood coagulation studies – venography (x-rays to view the veins) genetic testing, and special types of ultrasound if the underlying cause of phlebitis can’t be easily identified.

Risk groups and complications of Phlebitis

As we mentioned above, the average age of patients with phlebitis is over 60 years old and they’re mainly female. In addition, 90% of superficial thrombophlebitis is associated with people with varicose veins, while only 10% of them happen to people with healthy veins.

According to the AXA Healthkeeper Foundation, there are several risk factors that promote the development of phlebitis.

Beyond these common events, it could also be due to the presence of pacemakers in the central veins, family history of blood clotting disorders, history of stroke, and many other clinical conditions. Any condition that alters venous flow can result in phlebitis.

As far as complications, the early diagnosis of phlebitis allows prompt treatment. In contrast, a blood clot can develop in the lungs if left untreated and end up in a pulmonary embolism.

The angiologist and vascular surgeon are professionals in charge of dealing with cases of phlebitis. Furthermore, your health care provider can usually prescribe analgesics, anticoagulants, and antithrombotics to dissolve the clot in less severe cases:

Surgical removal of the obstructed vein may be considered if it’s superficial in patients with a more serious case. Alternatively, a doctor may do a venous bypass. These procedures are much less common than the aforementioned ones.

Find out what Causes of Superficial Thrombophlebitis

As you may have noticed, phlebitis is a fairly common condition, especially in older people with varicose veins in the legs. It’s a clinical condition with a positive prognosis but could worsen if not treated in a timely fashion.

Finally, the best thing you can do to avoid phlebitis is to lead a healthy lifestyle. So, you should move, exercise, quit smoking, and stay away from high-calorie food. You may not be aware of it but many diseases are the result of obesity. In fact, thrombi are one of them.

Five Natural Solutions to Treat Phlebitis
Phlebitis is a disease that affects your blood circulation. For those who suffer from it, there are different solutions to treat phlebitis. Read more »
Link copied!
Interesting Articles
Illnesses
Intellectual Disability: Degrees, Characteristics, and Available Treatments