Description and Characteristics of Retinitis Pigmentosa

Retinitis pigmentosa is a rare disease that affects the eyes. It's a genetic condition and results in severe loss of vision. It doesn't lead to blindness but greatly diminishes the quality of life though. 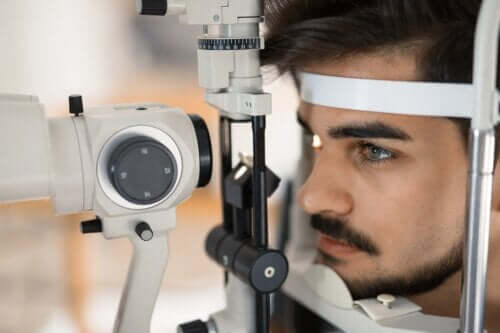 The disease known as retinitis or retinitis pigmentosa is actually a group of pathologies that have in common a genetic alteration that modifies the reception of light in the retina. The cells of the fundus of the eye progressively degenerate as the pathology evolves.

It’s a rare disorder with an incidence of 1 out of 3,000 people. In any case, it’s the most common of this group if you consider all the dystrophies transmitted from parents to children. What are the causes? Continue reading to find out.

This disease is genetic and hereditary. What this means is that parents pass it on to their children due to a gene mutation. We say it’s a group of disorders, and not just one, because researchers already identified thousands of changes in DNA (deoxyribonucleic acid) that culminate in retinitis pigmentosa.

Even so, it’s impossible to find the origin of the disease in about a third of those afflicted by it. No doubt it’s genetic, it’s only that it is impossible to reach the mutation that degenerates the cells in these people.

Its inheritance has been classified into three groups due to this variability:

Keep reading about the Ten Exercises and Foods for Good Vision

Symptoms of the disorder

This disease coincides with some symptoms that are general for all patients — despite responding to different mutations. The first signs usually appear during adolescence.

The progression of retinitis pigmentosa gradually leads to the loss of vision. However, it isn’t always the same type of loss. The most frequent forms are:

The first thing a doctor considers is the suspicion of retinitis pigmentosa. They’ll have a hypothesis from the beginning if a person has a family history of it. However, the task becomes more difficult if there are no previous records between parents or grandparents.

The physician will order a genetic test once they establish the symptoms. They analyze the composition of the genes to locate those that are defective and that could explain the disorder through a blood sample.

Furthermore, they may complement the evaluation with electroretinography, the measurement of the electrical activity of the retina, and also with an optical coherence tomography. The latter is a series of images obtained from the retinal tissue in high definition.

The visual field is a test that’s always performed in ophthalmology and doesn’t contribute to the diagnosis. It’s useful to establish the degree of involvement of a given patient. This is because it’s possible to know how much the progression has evolved based on the remaining visual capacity.

There’s no cure for retinitis pigmentosa. The treatments are mainly about trying to reduce the symptoms and slow down the progression of blindness to improve the quality of life of an affected person.

There’s been successful experimentation with high doses of vitamin A in the chemical form of palmitate. However, it’s neither clear if this is a treatment of choice, nor if the adverse effects of these concentrations aren’t a risk to other organs such as the liver.

Doctors also prescribe anti-inflammatory drops if there are bothersome symptoms such as itching, pain, gritty eyes, or redness. These drugs are for relief only but aren’t chronic management options in any way.

In addition, there’s the option of surgery in specific cases such as if the disease is accompanied by cataracts. In addition, the artificial retina implant is still under study to determine how effective it is.

The importance of prenatal consultation

Finally, because this is a hereditary disease, prenatal consultation in retinitis pigmentosa is essential. Anyone who’s considering having children and has a diagnosis of the pathology should know about it. There’s no way to avoid it, but they may be able to take some precautions.

Consult your doctor if you present any ocular symptoms or notice your vision is failing. An ophthalmologist should know how to perform complementary methods to address the problem.

6 Tips for Improving Your Vision Without Surgery
Improving your vision is possible, you just have to do these easy exercises every day. You'll start noticing results in no time! Read more »
Link copied!
Interesting Articles
Illnesses
Risk Factors for Mouth Cancer