Dark Circles Under The Eyes in Children: A Reason For Worry? 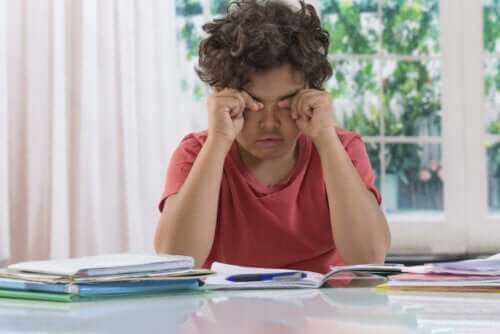 Although they’re rarely a cause for concern, it’s important to understand why dark circles under the eyes appear in children. The first thing you need to know is that they’re produced by an alteration in the color of the skin under the eyes or in the total contour of the eyes.

An excessive production of melanin and also the dilation of blood vessels can both cause this alteration. The skin around the eyes measures between 300 and 800 microns, meaning it’s quite thin, and this is why these physiological processes are so noticeable.

Common causes of dark circles under the eyes in children

It’s normal for parents to worry when they see their children wake up with dark circles under their eyes. After all, this condition makes them look sick, tired, and emaciated. However, they’re not necessarily a cause for alarm. The reasons why dark circles under the eyes of children appear are the following.

It’s normal for dark circles to appear when children have bad sleeping habits. This disorder is known as infantile insomnia and it affects children between the ages of six months and five years.

The consumption of foods and drinks like coffee or chocolate shortly before going to bed can affect children’s sleep. Performing physical activity at night, the stimulus of the light from technological devices, and ambient noise can also affect little ones and lead to the appearance of dark circles under the eyes.

Another cause of dark circles under the eyes of children is obstructive pediatric sleep apnea. This disorder is caused by the partial or total blockage of breathing during sleep due to a narrowing of the airway.

As a result of lack of sleep or excessive activity during the day, children may experience episodes of fatigue leading to the appearance of dark circles under the eyes.

In these cases, it’s necessary to review the activities that children carry out during the day in order to offer them time to rest and recover. Be careful when it comes to daytime naps that may affect how well children sleep at night.

As one of the most common causes, nasal congestion from flu, allergic rhinitis, asthma, or sinusitis also causes dark circles under the eyes of children. This color change isn’t only in the lower eye area, but also in the nose.

It occurs due to the dilation of the veins in these areas. It’s important to note that when there’s conjunctivitis, the eyelids become red due to the irritability of the skin.

Although they usually manifest themselves in adolescence, some children may have a genetic predisposition to have dark circles under their eyes at an early age. This condition is also known as congenital dark circles.

This is nothing more than a genetic hyperpigmentation in the area around the eyes and there’s rarely a solution. What’s good to know is that it doesn’t compromise your child’s physical well-being.

Neuroblastoma is a type of cancer that frequently occurs in the adrenal glands, in the abdomen, in the chest, or in areas of the body where there are groups of nerve cells. It appears in children under five years of age and causes bruising around the eyes.

It’s essential not to confuse these dark circles with those caused by other less serious factors. In the case of neuroblastoma, other symptoms also appear, such as subcutaneous lumps, proptosis (eyes that appear to be coming out of their sockets), bone or back pain, fever, and weight loss for no apparent reason.

Orbital cellulitis can be a serious infection. In children, it appears as a sinus condition. Therefore, it’s accompanied by dark circles or bulging of the eyes in children under 7 years of age.

You may be interested: Conjunctivitis in children: what should I do?

What do I do if my child has dark circles under his eyes?

Usually, dark circles under the eyes of children aren’t a serious condition. However, when there are other accompanying symptoms, it’s necessary to consult your doctor to rule out disease or illness. In order to improve their appearance, you can keep the following recommendations and natural treatments in mind.

In the case of dark circles under the eyes due to lack of sleep, you’ll need to keep your child from taking long naps during the day. Avoid watching TV or exposure to other screens before bedtime as well. You can talk to your pediatrician about the possibility of including infusions to help children fall asleep, such as chamomile or milk with honey.

At the same time, if your child does a lot of activities during the day, you may want to consider giving them more space to rest or do activities they find relaxing, such as yoga or meditation.

If you want to help reduce the appearance of dark circles under your eyes, you can resort to natural options such as cucumber slices. Place one slice under each eye. This will improve circulation, reduce inflammation, and hydrate this area.

You can also apply some coconut or almond oil to the circles with the help of a cotton ball. This will also help to reduce inflammation and encourage the growth of eyelashes.

Dark circles under the eyes of children, as in adults, are usually more of an aesthetic problem than a health problem. So, if you’ve already ruled out a physical problem with your doctor’s help, it’s best to stay calm.

In cases such as hereditary dark circles, it’s important to encourage your child to accept their physical characteristics and avoid the application of products that promise their elimination without medical approval. Natural options are valid, as long as there are no contraindications.

Did You Know that There are Different Types of Insomnia?
There are several different types of insomnia depending on the moment of the night it appears. Learn all about them in this article! Read more »
Link copied!
Interesting Articles
Children
How to Explain Death to Children?