Cystic Acne Is the Most Aggressive Variant of Acne

Cystic acne is a particularly aggressive form of acne. You get it mainly on your face where it causes unsightly lumps. Find out what causes it and how you can fight it. 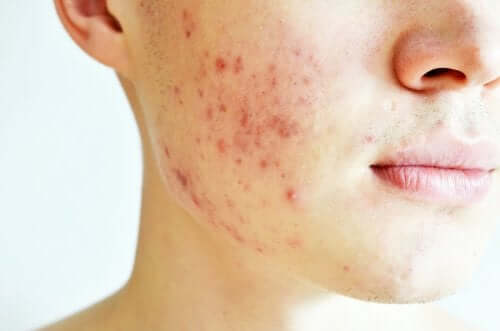 Cystic acne is the most aggressive form of acne. Some people suffer worse symptoms than others with this particular disorder. However, acne itself is quite common. In fact, it’s thought that approximately 80 percent of people between the age of 11 and 30 experience it.

It’s generally the younger population that suffers from acne. Indeed, although there’s a high prevalence of it amongst the under- 30s, the majority of cases occur in the under -20s. There are a number of different variants of acne and cystic acne is one of them.

Cystic acne’s an aggressive variant with more noticeable lesions than common acne. In fact, if you’ve got inflammatory lumps on the skin as opposed to blackheads, you might have cystic acne. Furthermore, the lumps are painful and the inflammation makes them appear red in color.

Cystic acne usually appears on your face. In fact, it makes your complexion really unsightly, and can also affect you psychologically. This type of acne can even cause scarring, unlike common acne. Indeed, marks tend to remain on the skin long after the inflammatory lesions have cleared up.

Whilst cystic acne usually appears on your face, it can also appear on your body. Less frequently, it might appear on your torso. However, it occurs less often on your upper limbs.

Causes of cystic acne, the most aggressive variant

Cystic acne occurs due to the same mechanism as common acne. In other words, your sebaceous glands become blocked and they’re unable to get rid of their contents. The function of the sebaceous glands is to lubricate your skin by producing an oily substance called sebum. This keeps your skin moisturized.

However, if your ducts that expel the sebum become blocked, bacteria builds up inside the gland. The kind of bacteria that’s nestling in the pores determines how aggressive the cystic acne will be. Microorganisms are then responsible for generating the inflammation.

Cystic acne’s also been linked to hormones. In fact, testosterone plays an important role. That’s why it affects men more than women.

In women, their menstrual cycles change the evolution of cystic acne. For this reason, women with polycystic ovary syndrome are more susceptible to cystic acne.

Women with polycystic ovary syndrome tend to be obese. In obesity, there’s more fatty tissue available to convert female hormones into testosterone. Therefore, the increase in testosterone in these women would explain why they tend to suffer from cystic acne more frequently.

Degrees and levels of presentation

Cystic acne doesn’t always present itself in the same way. In fact, sufferers can experience three different degrees of it:

Treatment of cystic acne, the most aggressive variant

Apart from the mild form of acne which can be treated with creams, the rest require oral or injectable drugs. The health professional will decide in each individual case what treatment is required.

The first stage of treatment is antibiotics. These work by destroying bacteria in the sebaceous glands. These treatments can last for months, or even up to a year.

The second stage of treatment is spironolactone. This drug is prescribed to women with cystic acne, particularly those with polycystic ovary syndrome. Spironolactone works by reducing the production of testosterone by the fat cells.

Finally, the most effective drug, but only used in certain cases is isotretinoin. This drug is taken orally. When it works, it does so by reducing inflammation and unblocking the clogged ducts of the sebaceous glands.

However, the problem with isotretinoin is its severe side-effects. It can only be prescribed by a dermatologist and the patient has to maintain regular check-ups during treatment. If women take it, they mustn’t become pregnant during treatment. This is because the drug can cause major fetal abnormalities.

So now you know, if you have cystic acne you must go to a doctor or a dermatologist. They’ll diagnose how badly you’re affected and give you the relevant treatment. It’s extremely important that you don’t automedicate, because this might only make things worse rather than better.