Chlorhexidine is a widely used medication used throughout the world, especially for oral health. Today we'll discuss here its general and topical uses. 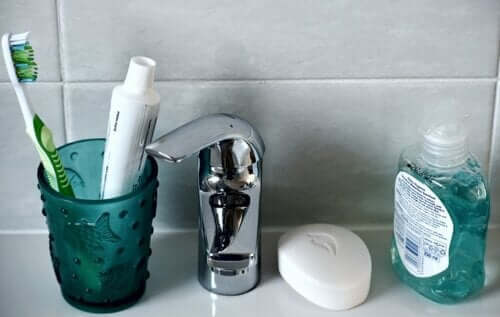 The difference between a disinfectant and an antiseptic lies in the surface or material each of them is effective on. The first inhibits bacterial growth in inert materials, while an antiseptic acts on living body tissues such as the skin.

The objectives of using chlorhexidine in the oral mucous membranes are to eliminate and prevent bacterial growth. Thus, it reduces the risk of an infected wound without being too harsh on the area where you apply it.

This compound sticks to the oral mucosa and releases gradually over eight hours, approximately. For this reason, professionals recommend chlorhexidine rinses two to three times a day.

This antiseptic is routinely used in dentistry, especially in the treatment of minor injuries to the oral mucosa. Chlorhexidine treatments can either be general or localized, depending on the suitability of the area to treat.

You’ve probably used chlorhexidine if you have a chronic tendency to suffer from canker sores or any other type of similar discomfort. Professionals recommend using chlorhexidine as a rinse, after brushing. In addition, this component is also present in some kinds of toothpaste.

You can use it as a spray if you need to treat localized injuries. This is because the action of this format is more localized and punctual. In fact, the localized application of this antiseptic is indicated in the following instances:

The specific oral use of chlorhexidine

Chlorhexidine for oral treatments is usually used diluted in concentrations of 0.2%, 0, 12% and 0.10%. One can apply it through different formats such as gels, sprays, and toothpaste. You must use the chlorhexidine mouthwash 30 minutes after brushing, rinsing a little bit of it for 30 seconds.

To treat localized injuries, such as dental surgery, professionals usually recommend the spray. This is because it has two important advantages:

You shouldn’t use this antiseptic for long periods of time because it could stain your teeth as well as darken your gums. However, don’t worry if it happens to you as these effects will disappear after you discontinue its use.

Most people who use chlorhexidine do so right after brushing as if it were a frequently used mouthwash. However, this isn’t right. In fact, the best time to use it is at least half an hour after brushing your teeth.

The reason why this is recommended is that chlorhexidine isn’t compatible with some of the components of many kinds of toothpaste. Some of these include sodium lauryl sulfate and sodium mono-fluorophosphate.

Its use as a topical antiseptic

Another use for Chlorhexidine is as a topical antiseptic. This is because it’s effective against a wide spectrum of microorganisms. It offers many advantages such as not being abrasive or irritating. In addition, it doesn’t interact with blood. Furthermore, this compound is hardly toxic and you can use it on open wounds such as chafing, cuts, and burns.

Also read: The Multiple Uses of the Mineral Alum

Side effects of chlorhexidine

The use of this compound doesn’t entail significant side effects, although some allergy symptoms and rashes may appear in the area of ​​application in a small percentage of its users.

As we mentioned above, the long-term use of chlorhexidine as an oral treatment can cause stains on the teeth and potentiate those produced by coffee or tobacco.

Chlorhexidine is an antiseptic that’s particularly effective against bacteria and fungi. Its use is widespread worldwide, so much so that it made the World Health Organization Model List of Essential Medicines.

All Natural Disinfecting Mouthwash for Your Tongue
Your mouth and tongue harbor bacteria that can cause bad breath. An all natural mouthwash is the perfect solution for this problem. Read more »
Link copied!
Interesting Articles
Medication
Progestin-only Birth Control: Benefits and Side Effects