There are many tools to help promote the health of the pelvic floor. Today, we'll about Chinese balls and their benefits, contraindications, and ways to use them. 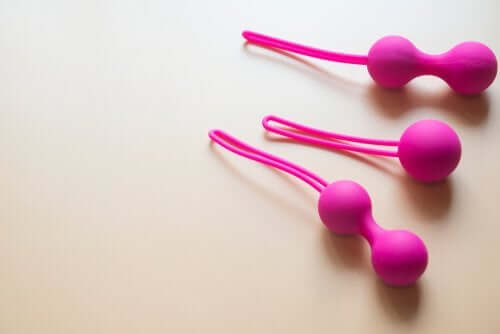 More and more women are aware of the importance of caring for our pelvic floor. The good news is there are tools to help, such as Chinese balls.

It’s also true that there are many tools that can help women maintain the health of the pelvic floor. Chinese balls are a good example of this. In fact, several commercial houses have released different balls with various shapes and weights, and even the cinema echoes their benefits for female sexuality.

However, as with self-medication, self-prescription for Chinese balls isn’t always the solution to all of the female pelvic floor problems. In fact, it can even be counterproductive and, depending on which cases, contraindicated.

This is why we always recommend that, before using a Chinese ball indiscriminately, you must consult a health professional. This is so they can evaluate the tone and strength of your pelvic floor. Thus, in the event of pathology, they can indicate the most appropriate treatment for your specific case.

In today’s article, we’re going to talk about the benefits, mode of use, and contraindications of Chinese balls. However, first, let’s take a look at what they are.

Chinese balls are a device consisting of one or two balls (multiple balls are usually linked by a cord) that house another smaller ball that produces a vibration in the pelvic floor every time a woman moves or walks.

The Chinese balls’ mechanism of action is as follows: when introducing the Chinese ball into the vagina, the pelvic floor must contract its involuntary muscles so the balls don’t fall out. Also, the small ball produces a vibration that increases lubrication and overall muscle tone when the woman moves.

A woman must move for the balls to fulfill their function. That is, it’s useless to put them in and lie down.

The use of the balls will work on your muscle tone. That is, it helps tone the basal state of the pelvic floor muscles, which you mustn’t mistake as a muscle that requires force. This latter is the voluntary contraction of the pelvic floor and you could attain by doing Kegel exercises.

So, if you want to work on your tone and strength, Chinese balls are a possibility. Then, to use them, a woman should do voluntary contractions of the pelvic floor while moving. This way, you’ll be giving your pelvic floor muscles a full workout!

Benefits of regular and continuous use

There are a few key benefits to the use of Chinese balls.

However, you must keep them away from your sexual activities.

The myth about women having orgasms simply by putting on the Chinese balls is a myth fueled by the film industry. It’s a myth because these devices are generally housed in an area of ​​the vagina that has practically no nerve endings. Therefore, they don’t generate any pleasure – at least not for the woman who’s using them.

In any case, the use of Chinese balls can and does improve a woman’s sexual experience in other ways. This is because the pelvic floor recovers its normal tone and also becomes stronger. The orgasms felt and experienced by women thus become more intense and last longer. The balls also promote lubrication, which is a must for an orgasm.

In addition to the aforementioned, you can use them for various pelvic floor dysfunctions. However, as we said above, you must follow the guidelines set by expert healthcare professionals. Here are some of the main uses and benefits of Chinese balls:

When not to use the Chinese balls

As we mentioned above, there are contraindications in regard to the use of Chinese balls in certain situations such as:

Remember, you must consult your doctor. Only they can diagnose you and prescribe the best treatment for your individual needs.

8 Things You Should Do To Take Care of Your Vaginal Health
Taking care of your vaginal health is fundamental for any woman. It isn't just a question of hygiene, but also helps you prevent diseases and avoid risks. Read more »
Link copied!
Interesting Articles
Anatomy and physiology
Characteristics, Types, and Function of Lipids

Symptoms such as unexplained abdominal bloating, prolonged periods of diarrhea, constipation, and foul-smelling stools can be indicative of impaired gut…

Interesting Articles
Diet
What is the Carnivore Diet?