Chemophobia, the excessive fear of chemicals, has actually become an obsession for many people. On one hand, there are chemicals throughout nature. On the other hand, our current civilization has been possible thanks to developments in chemistry. 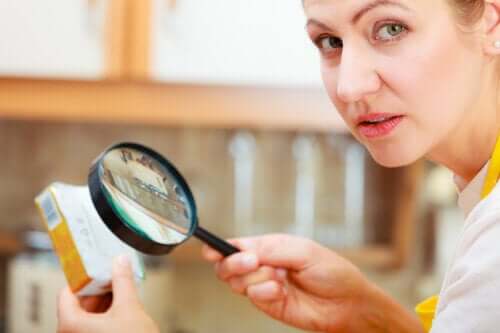 It started as a rumor, which then became fashionable. Then, it became a trend. Later, it became a phobia. “No preservatives,” “no chemicals,” and “no artificial colors” are some of the ads that claim to be purely natural. They also clearly demonstrate the rise of chemophobia, or the excessive fear of chemicals.

Without knowing exactly how or why, all of a sudden the word “chemical” has become the opposite of “natural.” It’s as if chemistry weren’t an essential part of nature and, obviously, human beings themselves. That mistake is what has led many people to develop this intense fear of chemicals.

Behind the fans of “the natural,” there’s a lot of false information and a whole marketing strategy. This mass hysteria isn’t healthy. In fact, it causes lots of fears and anxieties, in addition to practices that don’t help anyone.

Chemophobia, an excessive fear of chemicals

Chemophobia, the excessive fear of chemicals, started in the ’60s. The most famous reason for the start of this irrational fear was the book called Silent Spring by Rachel Carson.

The book talks about pesticides causing pollution. This is one of the most important popular science books of all time. However, it also made people begin to develop an irrational fear of all kinds of chemicals (not just the harmful ones).

Chemophobia has led to lots of habits that actually aren’t good for us. For example, many people nowadays don’t eat seafood because they assume they are all contaminated with mercury. The truth is that even if they do have mercury, it’s usually a harmless amount.

Also read: 10 Foods that, Just by their Appearance, Indicate if they’re Chemically-treated or Natural

The myth of natural vs. chemical

Some time ago in a small town, there was a sign next to a river. The sign read: “Warning: water contains large amounts of hydrogen.” In fact, people who had spent a lot of time there stopped going.

The sign said something true: water contains hydrogen and oxygen…In fact, two parts hydrogen to one part oxygen. These are some of the many natural chemicals that make up our world. The fact that people stopped bathing in that river after reading the sign is a perfect example of an excessive fear of chemicals.

The truth is that almost everything we see, eat and touch has a chemical. Chemicals are a part of nature and are not working against it.

A good part of chemical substances can be found in nature, while others are synthetic. That is, they are produced through industrial processing. However, both natural and synthetic chemicals can harm human beings. It all depends on the way they reach the body and how much there is.

Check this out: How to Avoid Chemicals during Day-to-Day Activities

A scientist said about five centuries ago that “the poison is in the dose.” That scientist was Paracelsus, and his statement is true. If a person drinks water without stopping, s/he could die from it. Also, if someone consumes many cups of vodka in a row, s/he can die.

On the other hand, a minimum amount of some harmful substances don’t affect the body. In addition to this, there are more regulations now than ever before. There are regulations for chemicals in medicines, foods, cosmetics, and more.

If we banned all chemicals today, our society would collapse. In theory, it would be impossible to have food available for everyone on the planet. We would have to give up medicine, plastic, and technology.

Fear of chemicals and marketing

In fact, many products that are advertised as “natural” really aren’t.

The “sodium-free” salt they sell in supermarkets swap out sodium chloride for potassium chloride. This could be even more harmful. A natural bread just doesn’t exist. (Does it grow on trees?) There are also no natural sweeteners or cosmetics that are “chemical-free”. It’s impossible to make them.

It’s very important to know about the harmful effects that certain substances can cause, like asbestos. However, it’s also very important not to make generalizations and cause false alarms. All it does is promote chemophobia and the excessive fear of chemicals…as a marketing strategy.

Repel Insects at Home without Toxic Chemicals
Are you tired of inhaling toxic chemicals used to get rid of insects in your home? Discover these natural ingredients that can be used to repel insects. Read more »
Link copied!
Interesting Articles
Illnesses
Hepatitis in Children: What You Need to Know