Characteristics, Uses, and Side Effects of Enalapril

The main side effect of enalapril, and of the ACE inhibitors in general, is a persistent dry cough that's resistant to antitussive drugs. 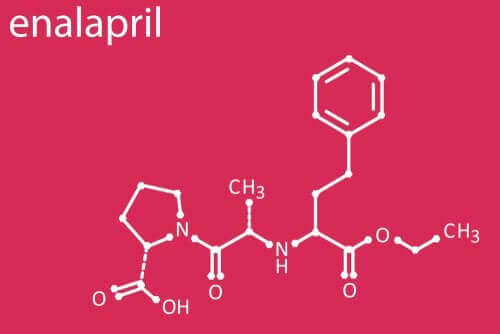 Enalapril is an ACE inhibitor of the angiotensin-converting enzyme. It’s used for the treatment of hypertension and some types of chronic heart failure.

The cardiovascular effects of ACE inhibitor drugs are complex and highly beneficial, both in the short and long term. Among them we can mention:

At the renal level, they produce an increase in renal blood flow and a moderate long-term effect of diuresis and natriuresis.

In principle, the clinical efficacy of enalapril is similar to that of the rest of the ACE inhibitor. The differences lie in the diversity of the pharmacological potency and its various pharmacokinetic characteristics.

The effect of enalapril in the body

The main effect is the reduction of angiotensin II production with the inhibition of the ACE enzyme. This molecule acts as a powerful peripheral vasoconstrictor and stimulates aldosterone secretion by the adrenal gland, which increases blood volume. Therefore, enalapril, and also the other ACE inhibitor, interfere in this process of the renin-angiotensin system.

However, the angiotensin-converting enzyme also acts on other substrates, such as bradykinin, whose levels increase. In turn, bradykinin increases the levels of nitric oxide and prostaglandins; hence all of them may contribute to the final vascular effect of the ACE inhibitor.

In addition, they interfere with negative feedback processes, so that, in the long run, concentrations of angiotensin I increase. Finally, since the latter can’t convert into II due to the inhibiting conversion enzyme, its metabolism diverts towards the production of angiotensin-1,7.

What happens to enalapril in the body?

Pharmacokinetics encompasses the processes of absorption, distribution, metabolism, and elimination through which the drug passes once administered. In this respect, enalapril is for oral administration and, if necessary, intravascular. However, we’ll focus on the oral as it’s the most common one.

After its administration, one can observe maximum plasma concentrations after one hour. There’s an absorption of 60% that’s not affected by the presence of food in the stomach.

The excretion route of enalapril is mainly renal. This process of elimination is an active principle to a large extent. This is so that its clearance decreases in the event that a patient suffers renal failure.

Read about the Seven Complications of Hypertension

Adverse reactions and contraindications of enalapril

The main side effect of this drug, and in general of the ACE inhibitor, is the production of persistent dry cough resistant to antitussive drugs. Enalapril stimulates the C fibers that transmit the stimuli to the center of the cough. In addition, the accumulation of angiotensin I cause vasoconstriction that produces a cough. This adverse reaction disappears four days after withdrawing from treatment.

The patient may suffer other effects not mentioned here besides all these adverse reactions. However, all of these reactions have a low rate of occurrence.

Pregnant women can’t take enalapril, as it affects the fetus. Neither can patients who are allergic to any component of the formulation.

Enalapril may interact with other drugs to increase or decrease their effect or that of the concomitant medication. Its administration with NSAIDs reduces its hypotensive effect, since the latter decrease the synthesis of prostaglandins.

Another interaction can occur when administered with antacids. This is because the latter reduces the absorption of enalapril. To avoid this interaction, professionals recommend taking them at least two hours apart. Finally, it also interacts with potassium-sparing diuretics. Their joint administration exacerbates the hyperkalemia of enalapril.

Enalapril is a prescription drug indicated for the treatment of hypertension. You should tell your doctor about it in order to prevent complications if you’re taking other medication when they prescribe enalapril.

Foods and Medicines that You Should Never Mix Together
There are certain foods that can alter or inhibit the action of some medicines, so you should avoid mixing them together prevent unwanted reactions. Read more »
Link copied!
Interesting Articles
Medication
Tretinoin and Acne: Warnings and Uses