Characteristics, Uses, and Effects of Escitalopram

Escitalopram is often prescribed for the treatment of depression. It's effect is about the ability to inhibit the reuptake of serotonin. 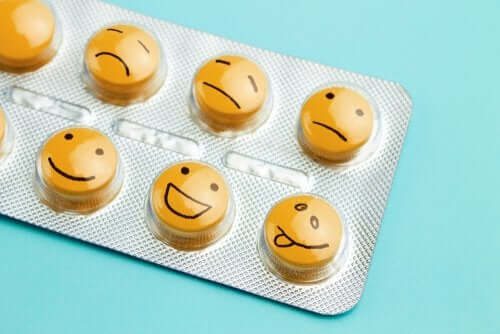 Escitalopram is classified in the group of serotonin reuptake inhibitors or SSRI antidepressants. For this reason, many of its characteristics are similar to other drugs in this pharmacological group — such as paroxetine or fluoxetine.

Similarly, escitalopram is the “S” enantiomer of citalopram, another marketed antidepressant drug. Enantiomers are a series of compounds in which the molecule of one is a mirror image of the molecule of the other, so they’re not superimposable.

A brief history of escitalopram

Lundbeck and Forest laboratories developed this drug jointly. They started to work on it during the summer of 1997. However, they didn’t finish it and apply for approval by the US FDA until March 2001.

As we mentioned above, one can attribute the short period of development to a previous experience of Lundbeck and Forest. One in which they developed another drug with similar pharmacological properties: citalopram.

As we’ve already seen, escitalopram is especially indicated to treat depression. The reason is because of its ability to inhibit the reuptake of serotonin. However, you won’t be able to understand how this drug exerts the antidepressant effect if you don’t entirely understand these two terms.

For one, depression is a severe illness in which a person is in a constant state of sadness. However, it goes beyond what many people think they know about it. It is, in fact, a brain disorder and has many causes, including different factors, such as:

Among the biological factors, we must mention neurotransmitters. These are chemical substances synthesized by the organism that favor the transmission of signals between one neuron and another. There’s an effect on one organism or another depending on the neurotransmitter released.

According to some researchers, serotonin is the chemical responsible for maintaining a balanced mood. Therefore, a deficit of this neurotransmitter can easily lead to depressive states.

Learn about Alprazolam: Uses and Effects

What’s the effect of escitalopram on the body?

This drug is highly selective in inhibiting the reuptake of serotonin. It has minimal effects on the reuptake of norepinephrine and dopamine, two other neurotransmitters.

Serotonin, like other neurotransmitters, secretes from one neuron to bind to receptors on the adjoining neuron membrane. It also triggers an effect in the body through a chemical signal transmission cascade when it binds to this membrane.

Furthermore, when there’s an inhibition of serotonin, it doesn’t get recaptured and increases its concentration in the space between one neuron and another. This is known as the presynaptic space. As more serotonin becomes available, it can re-bind to receptors on the neuron membrane and increase its effect on the body.

In addition, they have a low affinity, almost zero, for other types of biological amine receptors. This explains why escitalopram has fewer adverse effects than other drugs that inhibit the reuptake of serotonin.

Discover How to Prevent Depression due to Lack of Serotonin

Side effects and contraindications

The use of escitalopram is contraindicated in those with a known hypersensitivity to the drug or any component of its composition. Also, you can’t take it if there’s a concomitant treatment with MAO inhibitors or pimozide. This is because they can interact with them and become toxic.

On the other hand, the most common side effects of this drug are:

Escitalopram is a widely-used drug that’s safe for the treatment of depression. However, we can’t forget that it can trigger a series of side effects, like any other medication, even though it’s safe for the most part.

Always consult your doctor or pharmacist with any questions you may have about this drug. Also, and very importantly, never use it without a medical prescription and a doctor’s supervision.

What You Should Know about Prozac for Depression
Prozac is a medicine made of a substance called fluoxetine. Additionally, taking prozac for depression boosts serotonin levels in your body. Read more »
Link copied!
Interesting Articles
Medication
Trastuzumab: Therapy Against HER2 Positive Breast Cancer