Post-coital bleeding is usually caused by vaginal dryness, which in turn can have multiple causes. 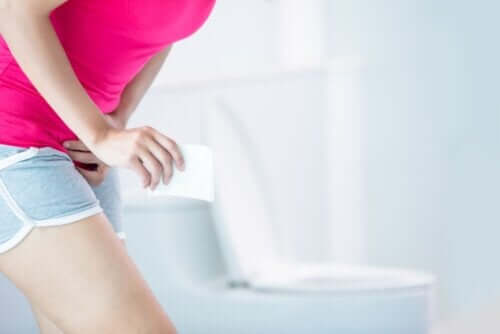 Post-coital bleeding is bleeding that occurs in women after sexual intercourse. The medical term used to refer to this situation is PCB. It’s a fairly common occurrence that isn’t related to menstruation.

Many women who experience this post-coital bleeding tend to panic. However, specialists estimate that it happens in about 10% of women. Moreover, half of the cases clear up spontaneously because they have don’t have any pathological cause.

In fact, there are many situations that can cause this post-coital bleeding. In this article, we’ll explain the most relevant situations so that you know what you can do if it happens to you. It’s important to know that the best idea is always to consult a doctor if you have any doubts.

Why does post-coital bleeding occur?

As we’ve already mentioned, post-coital bleeding has a very varied etiology. In fact, it’s most commonly due to some non-pathological cause that can be resolved spontaneously, such as a small wound from the friction of sex. Other possible causes are:

Infections are much more common than we think. In fact, as we’ve just mentioned, they aren’t always STDs. Many women experience bacterial or fungal infections throughout their lives due to a simple lowering of defenses or other reasons.

On the other hand, it is true that this post-coital bleeding may have more serious causes. Although not as frequent, the bleeding may be due to an endometrial polyp, a uterine fibroid, or even cervical cancer.

Cervical cancer is the most serious cause of this post-coital bleeding. Fortunately, this illness is becoming less and less common. This is due to the fact that women are going to gynecological check-ups more frequently.

In addition, many studies have shown that there’s a link between cervical cancer and the human papilloma virus. That’s why, nowadays, thanks to the vaccine against this virus, the number of women with this tumor has also been reduced.

You may be interested in: Learn All about World AIDS Day

How can it be diagnosed?

As we’ve just mentioned, the causes of post-coital bleeding can range from easily treatable dryness to a more serious problem, such as cervical cancer. Therefore, it’s important to visit a professional to get the correct diagnosis of the cause of this bleeding.

First of all, you need to know how to identify whether the bleeding is post-coital or not, and to differentiate it from a possible menstruation. Likewise, it’s essential to check that there aren’t any lesions in the area that may be causing the blood, such as a small tear.

The gynecologist will perform an examination of the entire area. In addition, complementary tests, such as a Pap smear and a culture, are usually ordered. Thus, infections or cancer can be ruled out.

On the other hand, to reach a diagnosis on the causes of post-coital bleeding, you have to explain the whole situation to your doctor, mentioning if you have any other underlying disease or if you take any medication.

You may like: Pap Smears at the Gynecologist’s Office

Post-coital bleeding is a very frequent situation, which, most of the time, has no pathological origin. However, we need to rule out any disease that may be causing it, such as an infection. Therefore, it’s important to visit your gynecologist if you have any doubts or concerns.

7 Uncommon Questions to Ask Your Gynecologist
Once you start having sex, it's important to go to the gynecologist regularly. Read this article to learn 7 uncommon questions to ask your gynecologist. Read more »
Link copied!
Interesting Articles
Illnesses
The Connection Between Erectile Dysfunction and Diabetes