Cold shock response is a process typical in summer. It can lead to mild discomfort but also to death. 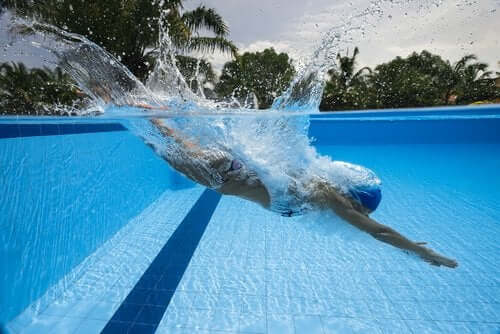 Cold shock response is a cardio-respiratory response also related to the digestive system and brain irrigation. Today’s article will explain why it happens.

This condition is often connected to the digestive process, although its main cause is a deficiency in the perfusion of the brain. In fact, it’s a consequence of the immersion reflex, conditioned by the difference in temperature between the body and the water a person goes into.

This process is more frequent during the summer and is directly related to the sudden change of temperature produced when you go into the water. The blood vessels dilate as a consequence of the heat and the sun by a mechanism that tries to keep the body temperature within the normal limits.

Vasodilation dissipates the body heat and, along with sweating, keeps the temperature within its normal range. Thus, the sudden vasoconstriction leads to a cold shock response when you suddenly enter water that’s colder than your body.

The food we eat mixes with gastric juices through peristaltic movements during the digestion process. This process requires a large supply of blood. Thus, it forces the redistribution of blood flow and favors the digestive section — to the detriment of other organs or systems.

Note that the digestive process isn’t the most important element in the appearance of hydrocution, but rather the “immersion reflex.”

You may be interested in: Unusual Heart Attack Symptoms in Women

The immersion reflex occurs when the body, especially the head, goes into the water. It depends on the difference between the temperature of the body and the water, and on the abruptness of the immersion.

It usually happens because there’s a decrease in the heart rate and redistribution of blood by the contraction of the blood vessels, especially those in the skin. This, in turn, happens in order to ensure a sufficient supply of blood and oxygen to the brain and to avoid a sudden change in body temperature.

The immersion reflex is quite evident in children. Also, people who are particularly sensitive to it get dizzy. Furthermore, this can lead to syncope and even sudden death by cardiac arrest.

Our body manages the arrival of blood and oxygen to the brain and thus, decreases the supply to other organs and tissues. Cardiac arrest can occur and leads to sudden death or drowning when the decrease in blood and oxygen supply to the heart is sudden and significant.

Cold shock response and the process of digestion

Digestion is a process that separates food components into smaller, digestible molecules. These molecules pass to the small intestine for the reabsorption of nutrients in the first instance.

The time it takes for digestion to complete varies from one individual to another and has to do with the amount and type of food ingested. For example:

The time our food remains in the stomach causes the redistribution of blood flow and can range from a few minutes to several hours. This is responsible for the sensation of drowsiness we sometimes experience after eating. This is because of the decrease in the amount of oxygen that reaches the brain.

We can say that a cold shock response occurs when a person hasn’t completed the process of digestion and dives into a pool where the temperature is significantly different from that of their body. This immersion reflex can cause everything from mild discomfort to death from cardiac arrest.

Read also First Aid: How to Respond During a Cardiac Emergency

As usual, knowledge and prevention are key when it comes to cold shock response. Thus, you must avoid all of the risk factors mentioned above.

Pull the person out of the water and dry them to try to bring back their normal body temperature if the cold shock response is already happening. Do CPR until the arrival of the health services if there’s syncope or cardiorespiratory arrest.

What’s the Best Temperature for Air Conditioning?
When it comes to paying for air conditioning, maintenance tasks, like changing filters or paying someone to adjust the unit make all the difference. Read more »
Link copied!
Interesting Articles
Illnesses
What Is Ischemic Heart Disease?