Carcinophobia, or the Fear of Cancer

It's reasonable to have a little fear of cancer, as long as it isn't excessive or lead to obsessive behaviors. If you're constantly afraid of getting cancer and this fear limits your life, you might want to talk to a psychologist. 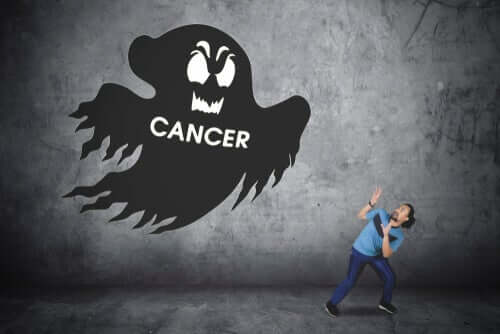 It’s normal to have a fear of cancer. After all, it’s a serious disease that can be unpredictable. Usually, you need serious treatments to cope with it. Nearly everyone is afraid of illnesses and death to some degree.

However, this fear becomes a problem when it starts to be irrational and obsessive. In that case, it’s a phobia. Therefore, it leads to taking unnecessary precautions that might even be counterproductive.

The exaggerated fear of suffering cancer also leads to unnecessary emotional suffering. You may start to see any symptom as a possible sign of cancer, and any circumstance may feel like a threat. However, this damages both your physical and mental health.

Carcinophobia: An excessive fear of cancer

Carcinophobia is the excessive and irrational fear of cancer. The word “irrational” doesn’t mean that it’s crazy or there’s no reason to be afraid. Basically, it means that the fear is exaggerated, or not based on fact.

Likewise, when there’s too much fear and it becomes a phobia, it affects your everyday life. You might avoid the sun because it can lead to melanoma. On the other hand, you might not eat certain foods because there are rumors that they cause cancer.

Carcinophobia constantly makes you anxious because you see risks where there are none. In fact, it’s very similar to what happens with hypochondria. People with this condition think any symptom is the end of the world, even if there isn’t a reason for it.

Also read: Help an Older Adult Cope with a Disease

The path of avoidance

One of the paths people with carcinophobia take is the path of avoidance. In other words, they avoid anything they think might cause cancer. It’s a flight behavior.

Overall, there are two types of avoidance:

The obsessive fear of cancer

Another common thing among people with carcinophobia is obsessive fear. In fact, you could say this is the opposite of avoidance. Instead of changing or distracting themselves from the subject, they obsess over learning everything they can about it.

Also, any time their body hurts or feels uncomfortable, they desperately go to the doctor. This is because they’re afraid any symptom is a cancer warning. However, they end up misinterpreting what they hear. If they go to the doctor and s/he doesn’t find cancer, they think the professional is wrong. Then, they go to a new doctor or even refuse medicine in general.

These people are constantly afraid, and going to the doctor makes it worse instead of better.

Myths and facts about cancer

You have to keep in mind that from the minute you’re born, you start to die. Sooner or later, we will all die for one reason or another. This isn’t easy for anyone to deal with, but it gets easier when we accept that it’s a fact.

Nowadays, cancer rates have increased worldwide. However, many people think this might be true because doctors can diagnose cancer earlier than before. Probably, diagnosing the disease has gotten better, which doesn’t mean the disease itself has increased.

Both cancer and other diseases can be prevented to some extent. However, it’s impossible to prevent them completely. In most cases, there are many different causes, and we can’t control them all. A healthy lifestyle, physically and mentally, helps a lot to prevent illnesses.

If you think you have carcinophobia, consult a psychologist.

Tips to Face the News about Cancer
Receiving the news about cancer makes a huge psychoemotional impact on the person. Without a doubt, there is a before and after. Read more »
Link copied!
Interesting Articles
Illnesses
Hepatitis in Children: What You Need to Know