Researchers are currently studying the BRCA-1 and BRCA-2 gene to try to determine the severity of breast cancer. Its mutation brings a worse prognosis to the disease. 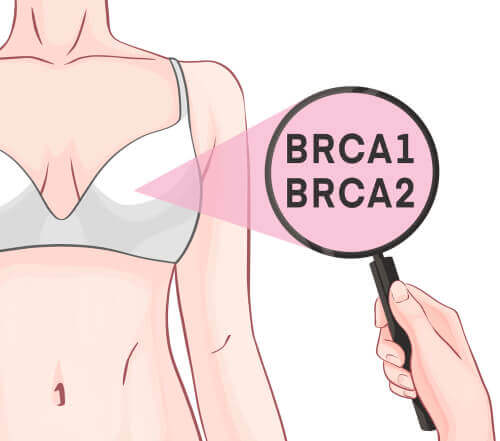 The BRCA-1 and BRCA-2 genes are a pair of human genes that manufacture proteins and their function is to try to suppress tumor growth. The proteins encoded by these two genes help repair any damaged DNA. In fact, they have the role of ensuring the stability of the genetic material of every cell.

Like all genetic material, the BRCA-1 and BRCA-2 genes can undergo a series of mutations or alterations. Thus, its structure can change and become inactive. When this occurs, they can no longer codify the protein so it can synthesize and repair the DNA.

As a result, it’s more likely for the cells to present the sort of genetic alterations that can lead to cancer. Specifically, the mutations of these genes increase the risk of breast and ovarian cancer.

Triple-negative breast cancer is a type of breast cancer that doesn’t have any of the receptors usually present in this disease. Thus, there isn’t an over-expression of the progesterone receptors, estrogen receptors, or HER-2. This type of cancer is currently one of the worst prognosis because chemotherapy is the only therapeutic measure.

Triple-negative breast cancer accounts for approximately 12-17% of all breast cancer cases. It proliferates quickly and has a high capacity to generate metastases. This and the difficulty in treating it is what gives it a bad prognosis.

One of the most frequent molecular events in these tumors is the alteration of the BRCA protein function. More than 8-% of breast cancer patients with hereditary BRCA-1 mutation have triple-negative breast cancer. In addition, estimates indicate that about 15% of patients with ovarian cancer and 5% of patients suffering from breast, pancreas or prostate cancer have inherited BRCA-1 or BRCA-2 gene mutations.

In December 2014, authorities authorized the applications for the marketing of olaparib in monotherapy for the treatment of advanced ovarian cancer with mutation in these genes. From these results, researchers analyzed the efficacy of this medication for the treatment of advanced breast cancer in previously treated patients with mutations in the BRCA-1 and BRCA-2 gene.

When applying the maximum tolerated dose of olaparib (400 milligrams every 12 hours, in capsules) scientists observed an objective response rate of 54% in patients with triple-negative breast cancer. What this means, hopefully, is that 7 out of every 13 patients had a good reaction.

Read also: Is it Possible to Prevent Breast Cancer?

Other alterations that affect the BRCA protein

In addition to the mutations of the aforementioned genes, there are other alterations that may be responsible for the abnormal function of the BRCA protein. One of them is the methylation contained in these genes. What this means is that the promoter of these genes gains a methyl chemical group, CH3-.

(The promoter of a gene is a region of DNA that controls the initiation of the transcription of a certain portion. In clearer terms, it’s the part of the DNA that initiates the production of a type of protein through RNA.)

Thus, due to their methylation, these genes cannot synthesize the protein responsible for suppressing tumor growth. Researchers observed methylation of the BRCA-1 and BRCA-2 gene promoter in several malignant tumors:

The BRCA-1 and BRCA-2 genes play an important role in breast oncology. A high percentage of breast cancer patients with alterations in these genes have a triple-negative form. They have it regardless of whether it’s due to a mutation or methylation. Unfortunately, their prognoses are worse because the available treatments are still limited.

It’s very important to continue the research in order to be able to develop new therapeutic options. And also to continue advancing in the cure for this disease. The genetic aspect of breast cancer is a hopeful area but there’s still a lot to do.

9 Symptoms of Breast Cancer All Women Should Know
Breast cancer, is one of the most common cancers among women, as a matter of fact, it is the second cause of death in the entire population. Read more »
Link copied!
Interesting Articles
Illnesses
Can Celiac Disease Cause Infertility?