The Effects of Energy Drinks on Your Body

On top of causing addiction, the effects of energy drinks include an increased heart rate. Just one can contains the same amount of caffeine as six cups of tea. 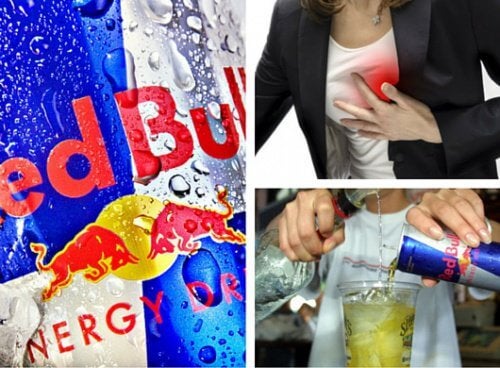 Energy drinks, such as Red Bull, have become very popular for a couple of decades. Scientists have been studying their side effects on health ever since then.

Red Bull is perhaps one of the most famous and most-consumed around the world. It stimulates people’s brains when they have to undergo intense physical exertion or various stressful situations.

For example, people often consume it during a long hard day at work, or while doing homework, or before an exam.

It’s true that this drink works and serves to prolong the energies when the body needs it. However, several scientific experiments that we will show below have shown that a single can causes alterations in several body functions.

Drinking energy drinks daily can lead to the development of various cardiovascular problems.

What are energy drinks and what do they contain?

A study carried out by the University of Vic – Central University of Catalonia (Spain) has come to the conclusion that the information we receive about energy drinks is insufficient. According to the research, only 76.3% of adolescent students are aware of the state of nervousness and anxiety that can result.

Energy drinks are commercial soft drinks that combine substances such as caffeine, amino acids (such as taurine), carbohydrates (such as glucuronolactone, a glucose derivative), vitamins and, in some cases, extracts from medicinal plants such as ginseng or guarana.

A single can of these drinks contains high amounts of caffeine, equivalent to four cups of coffee, as this research by the OCU (Consumers’ and Users’ Organisation) states.

A healthy person can consume between 100 and 300 mg of caffeine a day and a maximum of 400 mg in moderation. The OCU specialists agree that this high dose only poses a health risk if ingested continuously over time, and as long as it is not combined with other substances such as alcohol.

What are the main damaging substances present in beverages such as Red Bull?

In the case of energy drinks, one of the main problems lies in the combination of caffeine with other substances that can be quite dangerous. This is the case, for example, with aspartame, a compound that has been shown to be neurotic, metabolic and hypoallergenic.

It also tends to generate a certain addiction, as this study by the Universidad Peruana Unión states, making the consumer feel unsatisfied with only one can. This can cause the consumer to have several cans to satisfy his need.

The effects of energy drinks on your health

A ban on energy drinks in certain countries

An estimated 3.5 million cans of Red Bull have been distributed in 143 countries around the world.

However, Red Bull and other energy drinks have been banned in some places. Evidence that confirms the negative health effects of these beverages has worried the authorities of different countries. Today, energy drinks are prohibited in Norway, Denmark, and Uruguay.

In Kuwait, energy drinks became prohibited for minors under the age of 16 after two members of the national squash team died of heart attacks after consuming these drinks.

The main dangers of energy drinks

We’ve already seen the damage that drinks like Red Bull can have on your body. However, it’s necessary to see what specific harmful effects their consumption may imply.

While we still need more scientific evidence to determine how dangerous these beverages can be, in the meantime, here are some warnings to consumers about their possible effects.

Effects on the digestive system

Effects on the circulatory system

Damage to the nervous system

If, despite knowing the negative effects of energy drinks, you still want to consume them, do so with great caution and in consultation with a specialist!

Emotional Exhaustion: How to Recover Your Energy
Learning to accept your circumstances and letting everything flow around us can be one of the best ways to prevent emotional exhaustion. Read more »
Link copied!
Interesting Articles
First aid
The Chain of Survival