By implanting a small device in the brain, patients with paralysis will be able to move again by making use of subconscious thought. 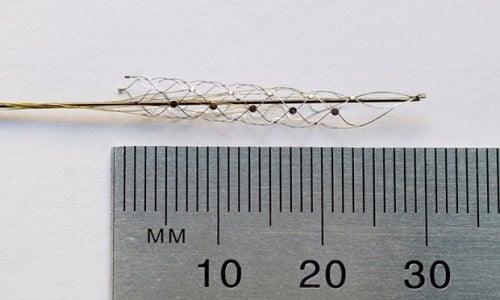 The new development of a “bionic spine” has a lot of scientists and doctors talking.

In recent decades, technology and medicine have advanced to the point that specialists are developing treatments and solutions for conditions once thought incurable. Thanks to the significant progress is science, many sick people have been able to improve their quality of life and life expectancy.

These findings have given hope and treatments are now much more effective than they were in the past.

A recent example involves a group of Australian researchers who created a tiny device that’s just over an inch long. It could help those with paralysis or a prosthetic limb to walk again.

They call it a “bionic spine.” Doctors implant it in a blood vessel on the side of the brain to restore mobility in paraplegic patients using subconscious thought.

Read: How to Purify Bacteria in the Air

The Bionic Spine: A Promising Technology

The researchers who created this interesting device belonged to the Royal Melbourne Hospital and the University of Melbourne and the Florey Institute of Neuroscience and Mental Health.

The idea behind the device is to find a different way to link thought with the body’s movements. This means that a person with one of these devices implanted in their brain could make movements with their subconscious thoughts. Thus, they won’t need to make the conscious effort to complete the action. Therefore, it allows them to move about as they wish, just like anyone else.

Doctors implant the bionic spine by making a small incision in the neck to insert a catheter with the device inside. Once in the blood vessel, the blood transports it to the brain’s motor cortex. That’s the area of the brain responsible for generating the nerve impulses that control voluntary muscle movements.

After they remove the catheter, the electrodes on the bionic spine adhere to the walls of a vein. Then, they will begin sending signals directly to the motor cortex. These signals transmit to another device implanted in the patient’s shoulder. Then, finally, they go to the bionic prosthesis, which utilizes Bluetooth technology.

This is not something that a person will be able to accomplish right away. However, researchers assure that with training and deliberate thought, little by little the patient will slowly be able to control their movement subconsciously.

Until now, they have only tried device in sheep. However, human trials will begin in 2017.

The Austin Health Spinal Cord Unit will chose the three patients for the trial. They will perform the surgery at the Melbourne Royal Hospital in Victoria, Australia.

For the initial phases, they will chose patients with paralysis of the lower extremities. Doctors and scientists will analyze and treat their response.

According to statements from Terry O’Brien, head of the hospital’s neurological department, this development is the “holy grail” of research in bionic technology.

Meanwhile, Dr. Nicholas Opie, chief researcher and biomedical engineer at the University of Melbourne, said that it’s a simple, although extensive, procedure.

After surgery, the complicated part will be learning  how to use it. Patients will need to use thought to move the bionic limbs naturally using the subconscious.

This solution does not repair the damaged pathways in the brain. Instead, it uses alternative routes to carry signals to the corresponding extremity.

“What they’re doing is implanting a transmitter to carry the signals necessary to move the limb by bypassing the damaged area,” explained the doctor.

This is not the first piece of technology to improve mobility in patients with paralysis. However, the team behind its development assures that it’s a very breakthrough in both results and scope.

If the responses are positive in the human trials, scientists expect the treatment will also be useful for patients with other conditions. These include epilepsy, obsessive-compulsive disorder, and Parkinson’s disease.

They published a description of this technology in Nature Biotechnology.

Cancer May Now Be Detected Early with Blood Tests
Even though it's still in the experimental stages, this medical advance could be an alternative to invasive tests for early cancer detection. Read more »