Is It Bad to Put Ice In Your Drinks?

Summer's here, and it's time for that nice, ice-cold beverage...but is using ice really a good idea? Find out in this article! 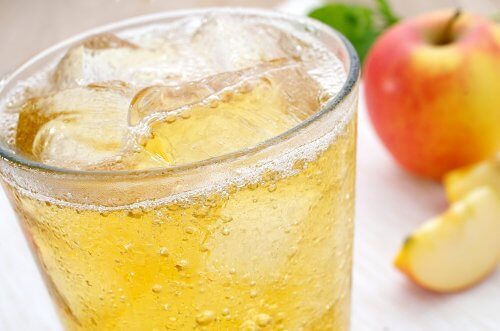 When summer arrives, sometimes all you want to do is feel cool any way you can. One of these ways is to consume an ice-cold drink. But is it bad to put ice in your drinks?

If there are no more cans in the fridge or the freezer, then you may choose to put ice in your drink. Problem solved!

Did you know this isn’t a good idea? In this article, we tell you the reasons why you it could be bad to put ice in your drinks.


There have been several studies to determine whether ice cubes, which are very popular in summer, are good for your health.

The results were chilling: in most fast food establishments and trendy cafés, the water used to make ice was filled with bacteria. Surprisingly, the amounts were similar to those found in the restrooms of the same establishments.

Are we comparing toilet water to the ice in drinks served at a chain of restaurants? Yes. And the worst of all is that toilets are cleaned more often than the ice machines.

The heads of these multinational chains have suggested that the possible discovery of this bacteria is due to human contamination.

That is, those who use the machines and the cubes are the same employees who also clean the restrooms. These employees are also in contact with the money and clean the floor, but don’t wash their hands.

Laboratory tests didn’t show any serious contamination in the beverages of these establishments. However, the truth is that the levels of bacteria were higher than what is considered “normal”.

Note that the problem is not the water that the ice is made with, which, in all the cases studied was drinkable. Instead, it’s the existence of bacteria in the machine or the hands of those who serve the drinks.


Perhaps bacteria entering the body through soft drinks isn’t a problem for a healthy person. However, it may be an issue for certain groups, such as children, the elderly, and individuals with weakened immune systems.

You should be especially wary of ice during trips to countries or cities where the water may not be safe to drink.

In this particular case, we recommend that you don’t consume ice cubes at all. It’s better to consume a warm drink than spend several days locked up in your hotel because you have diarrhea, stomach cramps, or vomiting. And this is the best -ase scenario.

Is it still bad to put ice in my drinks if I prepare the ice?

If a scientific study says that restaurants and cafeterias don’t have the best sanitation practices, we might not even be surprised. But what if we don’t eat at those places? Instead, we may put ice in our glass that comes from our own freezer.

Surely it wouldn’t be as big of a deal, right?

It’s almost the same as in a food establishment. When you put the water into the cube maker: did you wash your hands? And were your hands clean when you put the cubes in the glass? Believe it or not, the situation is quite similar.

And that’s not all.  If you haven’t cleaned the ice dispenser in the refrigerator or the ice cube tray, it’s likely that mold has grown in them. This will then go straight into your drink and end up your body.

It’s important to make sure the ice cube tray is clean, just like your hands, before pouring the water into it. Wash your hands to avoid transferring any germs or bacteria when preparing ice cubes and before serving them.


If you meet all the hygiene requirements when preparing and placing ice cubes in your glass, there’s less of a chance of introducing microorganisms that are harmful to your health.

However, there’s still something else worth considering when it comes to rethinking your consumption of drinks that are too cold: irritation in the throat and vocal cords.

If the first thing you do is drink soda, juice, or a glass of cold water (whether from the fridge or with ice cubes) when you get home feeling very hot,  you can later suffer from a sore throat or even dysphonia. Thus you might consider whether it’s bad to put ice in these drinks in your own situation.


Something really interesting about putting ice in your drink is that this involves the intake of cold liquids. These will end up in your stomach.

It has been confirmed that the consumption of water with ice or water that’s  almost frozen during the meals produces indigestion. That’s why some East Asians consume warm green tea instead of cold juice or soda.

The blood vessels contract when you consume cold liquids. It could make it bad to put ice in your drinks when you eat. This increases the production of mucus in the body and this stops proper hydration. This is another point against the use of ice cubes in your drinks.

Instead, by drinking warm liquids like tea, the intestines move better and digestion does its job faster.

Lastly, you must know that consuming something warm or hot when you eat helps your body better digest the fats you are ingesting. This prevents them from solidifying on the walls of the stomach.

We advise drinking tea when the menu includes foods with fats, such as oils, nuts, meat, egg yolk, or butter.

Papaya, Green Tea, and Aloe Vera: The Answer to Bloating
When the healing properties of papaya, green tea, and aloe vera come together, you get a remedy that's more than the sum of its parts. Read more »
Link copied!
Interesting Articles
First aid
The Chain of Survival