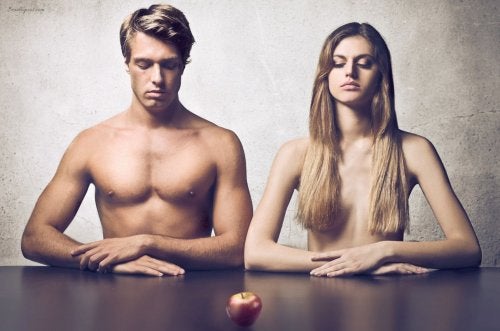 It might seem impossible to us that there could be people that don’t experience sexual desire. That there are people who simply don’t feel any attraction to others, or to the pursuit of pleasure. This is known as asexuality, a complete lack of sexual desire.

Asexuality is something that very few people know about. It can also cause extreme stress in a couple. Why? Because in addition to the lack of sexual desire, the person may not feel the need to maintain the relationship.

What’s more, they may try to avoid it.

Is asexuality a consequence of celibacy or certain religious beliefs? The answer to that is “no.” It is a natural condition that a person experiences.

Because an asexual person has a lack of sexual desire, they don’t feel the need to maintain relationships. Because of all this, experts consider asexuality to be a non-sexual orientation.

However, there is so much ignorance and so little research on this subject. Many people believe that those who are asexual are actually repressed.

It’s true that this is a strange situation. Human beings naturally feel a sexual desire to enjoy pleasurable experiences and to be able to procreate. Despite this being an uncommon and unusual circumstance, it’s not a disease or a characteristic that defines a repressed person.

You might think that an asexual person would be able to avoid a lot of problems. All types of sexual orientations, including this non-sexual one, should be respected equally. Unfortunately this isn’t the way it happens in reality. Asexual people suffer from a lot of society pressure because they’re different.

Javier, an asexual person, shared the following: “It took me a long time to have a partner and be in relationships. When I did, it was because of society pressure. I just never felt the need.” These people are “forced” to be like others and to look for someone. They constantly have to deal with questions like, “When are you going to get a boyfriend or girlfriend?”

Do not miss: 7 benefits of being single and happy

In the worst of cases, they’re actually marginalized by society. Can you imagine how today’s sexually-charged advertising must appear to an asexual person? That constant, eroticized content for this person means nothing. It just doesn’t have any effect on them.

A lack of sexual desire has always existed

A lack of sexual desire has always existed. However, most people are never aware of this until they’re with a sexually active partner. In spite of this, and based on what Javier told us above, a question remains. Do asexual people really not want to be in a relationship?

While Javier said he didn’t need to be with a partner, many asexual people do want that – although without sex. The real trouble arises when an asexual person falls in love with someone who is sexually active. It’s vital that they talk about how to continue their relationship. It’s important that neither should make sacrifices that they don’t feel they should have to make.

Being asexual doesn’t mean that a person is incapable of love. We all need affection, but not everyone needs sex. Unfortunately, asexual people sometimes feel forced to have sex. They don’t want to, but they go along with it anyway. It’s not something that they enjoy or detest, but they do it for their partner.

For this reason, the couple must talk about what to do when one person is asexual and the other isn’t. Communication is always essential, and even more so in these cases.

“Maintaining a relationship where one partner is asexual and the other is sexual depends on the agreement they both come to. There are some who have sex prior to dating, while others maintain an open relationship.”

Before you go, discover: “I want to be single, but with you”, the viral letter

Have you ever met someone who is asexual? Many people don’t even know that they are, they simply are aware that they don’t feel sexual desire for others. The most important thing if you want to maintain a relationship is that both of you talk about the situation. This will help you to understand each other, and that things will go as smoothly as possible.

The less you hide, the more awareness you’ll have to be able to understand each other better.

6 Situations In Which You Shouldn’t Have Sexual Relations
Sexual relations should be satisfying and beneficial for both parties in a couple. Any time this isn't true, we need to think about if it's good to do it. Read more »
Link copied!
Interesting Articles
Health and sexuality
5 Types of Sexual Orientation