Are there Benefits to Genetically Modified Food?

What exactly is genetically modified food (GMO)? How is it produced? What effects does it have on people and on the environment? There are many questions about this topic, so we'll try to answer some of the most common ones here today. 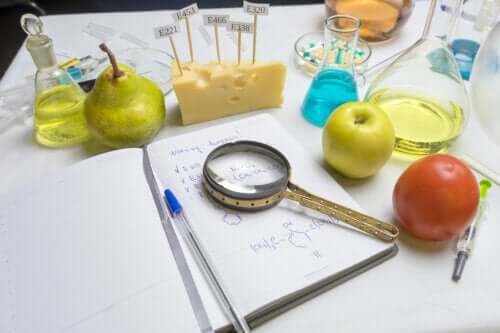 Genetically modified food (GMO) is more common than ever. Still, people often view it as the product of a dystopian society. Thus, there’s a tendency to reject it. After all, modifying something as established as the genetic code of our surroundings can’t be good, right?

Thus, different interviews revealed that the rejection of these types of food is fairly high among the population. This is because 33.4% of those interviewed think they provide more harm than benefits, while their acceptance is only 22.8%.

There are still mixed feelings on this topic, but first, let’s be clear as to what a GMO actually is.

Genetically modified food is food resulting from an organism modified by genetic engineering. In these foods, genes from another living being have been incorporated to produce the desired characteristic. Therefore, not all commercial foods have this characteristic.

Also, it’s important to differentiate between genetic and transgenic selection. Many types of food are products of the intentional crossing of plants with the best possible genetics. (Those with the largest seeds, the most striking fruits, the best colors, etc.). These aren’t transgenic, though.

To meet this condition, their genome must’ve been artificially modified somehow.

This may sound complex. In fact, it is! Therefore, we’ll limit the explanation of how companies produce transgenic food to its most basic concepts:

This formula is a simple way to understand one of the most widespread methods of transgenic production.

What benefits do transgenic foods provide?

Multiple studies, such as one published in the Journal of the Royal Society of Medicine, capture the benefits of genetically modified foods.

First of all, one must take into account that there are more than 840 million people on the threshold of poverty on the planet. Furthermore, they seldom reach a daily caloric intake of 2,000 kilocalories. Thus, human action is necessary to source resources.

In regards to the health of the general public, there’s no scientific proof of tangible danger in transgenics according to the World Health Organization (WHO).

Also, there’s no evidence that GMOs cause cancer, either. Also, these types of food undergo extensive testing, especially to prevent toxicity and allergenic effects in the general population. So far, no publicly authorized GM food has ever presented adverse actions.

Of course, not everything is good news. There’s always a risk that modified crops will cross-pollinate with other less desired vegetables and this could create imbalances in the natural ecosystem. Those vegetables that show resistance to pests may also end up negatively affecting other species.

Not everything is good in the world of transgenics. This is because they can cause detrimental effects on natural ecosystems and the species that live in them. Furthermore, there’s a risk of monopolizing food resources, in which only those with access to these techniques will succeed in the future markets.

As you’ve seen in this article, transgenic foods have a bad reputation. They’re very subject to scrutiny. However, they have both good and bad qualities. The question is: Will we be able to live without them in the near future on an overpopulated planet threatened by climate change?

The debate is still open.

8 Foods that Can Cause Cancer
Did you know that scientists have found a clear link between processed meat and cancer? Here are 8 foods that can cause cancer. Read more »
Link copied!
Interesting Articles
Nutrition
Nutritional Information and Health Benefits of Peas