Antidepressants and Alcohol: What Effects Does Combining Them Have?

The exact interaction between alcohol and antidepressants is not yet known. Many times it depends on the amount of alcohol consumed or the type of antidepressant in question. 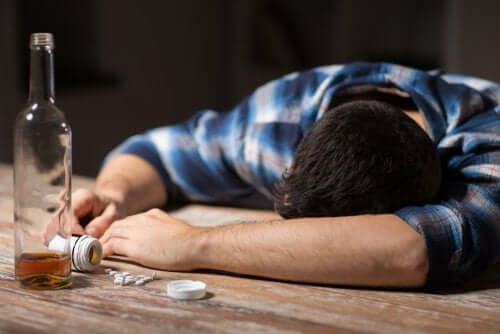 Many people combine antidepressants and alcohol without knowing that this combination of substances can have serious health consequences.

In addition, 15% of the people who suffer from an affective-type disorder have an alcohol dependency, which makes the situation worse.


Antidepressants are a well-known treatment option for depression, an illness that affects 15% of the population.

In the body, we have substances called neurotransmitters that are responsible for transmitting signals. One of them–serotonin–regulates mood and its deficiency leads to depression. However, it’s not the only neurotransmitter involved in this disease.

Thus, antidepressants aim to increase the concentration of these neurotransmitters in the body and thereby reverse this pathological mood.

There are different types of antidepressants such as the following:

What effects do they produce?

Despite having a different mechanism, all antidepressants have the same objective. Among the side effects that they can produce in the body we can highlight the following:

Read also: How to Overcome Depression Due to Infidelity

The danger of taking antidepressants and alcohol


Experts are unaware of the exact interaction between alcohol and antidepressants. What’s more, it often depends on the amount of alcohol a person consumes and the type of antidepressant they’re taking.

For example, selective serotonin reuptake inhibitors, as we’ve seen, increase the concentration of this neurotransmitter, preventing its reuptake. Alcohol, at the same time, also increases serotonin levels, although in a temporary way.

In this way, a person who takes antidepressants and alcohol is at risk of having too much serotonin in the brain and, as a result, they may develop serotonin syndrome.

Discover: Antidepressants and their Contraindications

What is serotonin syndrome?

As we’ve mentioned, serotonin syndrome is a clinical condition that results from an excess of serotonin. However, its severity is very variable and depends on the cause.

Patients with this syndrome experience restlessness, agitation, high blood pressure, muscular spasms, and diarrhea. What’s more, in the most severe cases, the patient’s life may be in danger.

On the other hand, if alcohol consumption is chronic and prolonged, it can lead to low levels of serotonin. Why? Because our body adapts to psychoactive substances through a phenomenon known as habituation.

Thus, when getting used to the intake of alcohol, depressive symptoms appear because the available serotonin decreases. And if, in addition, the person takes antidepressants, the result will be a decrease in their effectiveness.

The effects of combining antidepressants and alcohol


The resulting effects of this combination of substances are an aggravation of the adverse effects of antidepressant drugs. Some examples are:

As you can see, the combined use of antidepressants and alcohol can have serious consequences. Therefore, before beginning treatment with this type of medication, it’s very important that you discuss your alcohol consumption with your doctor, especially if you have any type of pathology with this substance. Otherwise, the consequences may be fatal.

5 Useful Ways to Handle Depression
It's good for people to be aware of some habits and strategies that can help people handle depression and deal with its symptoms. Read more »
Link copied!
Interesting Articles
Medication
Trastuzumab: Therapy Against HER2 Positive Breast Cancer