Allopurinol for Gout: Side Effects and Indications

You must note that allopurinol doesn't cure a gout attack, people mainly use it as a prevention method when a person is undergoing treatment with other drugs. 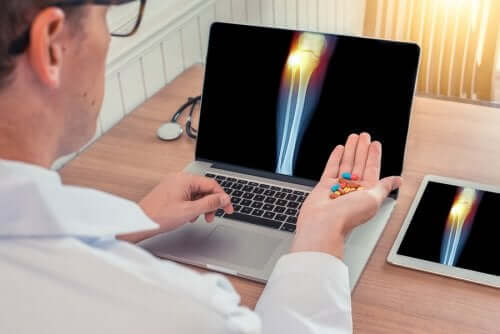 Allopurinol is a medication for the treatment of gout and for controlling high levels of uric acid in the body. It’s prescribed in cases where the gout is due to side effects caused by other drugs. For instance, those used for the treatment of cancer and kidney stones.

However, you must keep in mind that Allopurinol doesn’t exactly cure gout attacks. Instead, it’s merely a method of prevention for patients undergoing treatment with other drugs, such as those we mentioned above.

Gout usually manifests as acute joint-type inflammation, usually in the big toe. In other words, gout causes an asymptomatic inflammation in a joint as it swells and causes pain for a short amount of time.

This inflammation happens due to the presence of monosodium urate crystals. This substance is an excess of uric acid in the blood. Elevated levels of this acid usually have to do with bad lifestyle habits, such as poor diet and alcohol intake. When these levels normalize in a sustained manner, the crystals usually dissolve without a problem.

Hyperuricemia is the condition of a person who has high uric acid levels. However, although this condition is common (it afflicts 7% of men), only a minority of people develop the characteristic gout crystals.

When a gout attack is over, some monosodium urate crystals remain in their joints. So, even if the treatment is over, the person could have another gout attack at any time.

You may be interested: Do You Suffer from Gout? Avoid These 7 Foods

Side effects are more common in patients with renal or hepatic impairment. And the reason for this is that Allopurinol metabolizes in the liver and is excreted by the kidneys. Thus, due to these changes, drug concentrations in the body could either increase or decrease.

Their effect increases together with those concentrations. So, it’s easier for a patient to experience side effects. Let’s look at the most common unwanted effects this medication produces.

Skin reactions due to Allopurinol

These are the most common and may appear at any time during treatment with Allopurinol. Among them:

If the first four of these occur, you should discontinue treatment with this medication. You could restart and gradually increase the dose after recovering. But if you get a rash then you must discontinue it permanently.

Even though it doesn’t happen frequently, there might be some hypersensitivity reactions such as:

If these reactions occur, you must stop treatment with Allopurinol immediately and forever. In these cases, your doctor will most likely prescribe corticosteroids in order to reverse these generalized hypersensitivity symptoms.

The most common reactions in the digestive system are nausea and vomiting. To avoid this, you must never take Allopurinol after a meal.

Granulomatous hepatitis due to Allopurinol

This adverse reaction seldom happens without the obvious evidence of a more generalized hypersensitivity. Once you interrupt treatment its side effects seem to reverse.

Allopurinol is a very effective drug for preventing gout attacks caused by the intake of other drugs. This is because it’s a medication subject to medical prescription. So, you shouldn’t self-medicate. Mainly because the misuse of this medicine can lead to serious health problems.

Consult your doctor or pharmacist for any questions you may have or for information about any side effects.

Effective Natural Remedies to Treat Gout
Gout is a condition produced by the accumulation of uric acid in the joints. Fortunately, there are some natural remedies that can help treat gout. Read more »
Link copied!
Interesting Articles
Medication
Magnesium Deficiency: Low Magnesium Levels in the Blood