All About Smegma and Why it Occurs

The appearance of a white, foul-smelling substance on the genitals can be common, especially due to poor hygiene habits. This substance is called “smegma”. Learn all about smegma below! 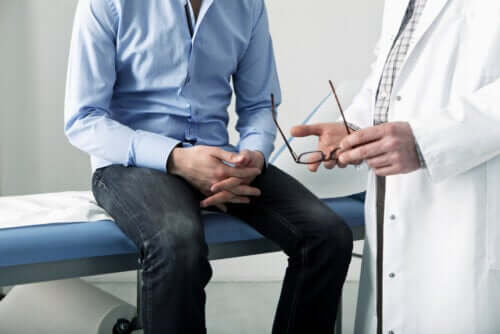 Although smegma buildup is more common in men, it can also appear in female genitals. This substance appears under normal conditions. However, an excessive amount can produce bad odors, meaning it can be very uncomfortable.

All about smegma: what is it?

It’s a natural body secretion whose main function is to lubricate the penis and vagina to facilitate intercourse. In men, it usually appears in the balanopreputial sulcus, just below the penis glans. It’s secreted by Tyson’s glands or by the hirsuties coronae glandis (also known as hirsutoid papillomas).

In women, this discharge appears around the clitoris and between the labia majora and minora of the vagina. A small buildup of smegma usually doesn’t cause bad odor. It becomes problematic when it mixes with other bodily components.

When this occurs, the smegma turns white, with a cheesy consistency and a rather foul odor. Some of the substances that can mix with smegma to acquire these characteristics are the following:

This discharge is very common in men who suffer from phimosis or who aren’t circumcised. This is because, in both situations, the glans is covered by the foreskin. Thus, hygiene can be quite complicated.

You can also read this article: Before and After Oral Sex Hygiene Tips

Can it cause any complications?

The main effects of smegma on the life of those who suffer from it are psychological. When a person’s genitals give off a foul smell, they may feel self-conscious about having sex, as this can be embarrassing.

Some microscopic analyzes have shown the presence of bacteria in this smegma. Therefore, excess smegma buildup could lead to infections. In addition, in men, it can lead to a condition called balanoposthitis, which is inflammation of the glans and foreskin.

On the other hand, smegma can harden over time, meaning it can cause the foreskin or labia to stick together. This is quite painful and requires medical intervention.

For years, the presence of smegma was associated with the development of penile or uterine cancer. However, several studies have shown that this relationship doesn’t exist. This means that there’s no scientific proof that smegma is a carcinogen.

This article may interest you: Before and After Oral Sex Hygiene Tips

All about smegma: treatment and prevention

In most cases, smegma buildup doesn’t require a specific treatment or prevention mechanism. As this problem is usually due to poor hygiene, all you need to do is periodically wash the area with warm water and soap to eliminate the buildup.

Thus, men and women that are prone to excessive smegma production must have good daily hygiene habits. It’s important for them to wash their genitals daily to avoid the appearance of bad odors, especially after having sex.

You should remember that, during and after sex, the body produces lubricating and sex hormones, which are part of the substances that make up smegma. To avoid possible glans and vaginal irritation, use mild soap and don’t scrub the area too hard.

On the other hand, when this substance appears due to phimosis or another abnormality, you may need to apply topical antibiotics and other creams to treat it. These drugs help regulate the function of the Tyson’s glands.

If you suffer a complication due to the buildup of this substance, you need to see a doctor. Only a professional will be able to solve this situation and indicate the treatment to follow.

Preventing bad genital odors and the various conditions that can cause them is usually simple and almost always related to hygiene. You must remember that this is a moist area, meaning it can favor the proliferation of microorganisms that cause bad odors.

The appearance of smegma usually doesn’t have serious consequences for a person. In fact, simply taking a few hygiene measures is enough to remove the substance.

What is Phimosis: What You Should Know About Tight Foreskin
Phimosis is a fairly common problem, especially in children. An estimated 2% of 17-year-old adolescents suffer from a tight foreskin. Read more »
Link copied!
Interesting Articles
Anatomy and physiology
Why Are Some People More Sensitive to Pain than Others?