All About Bronchiolitis: Causes, Symptoms, and Treatment

Bronchiolitis affects up to 20% of children under two years of age. It’s much more likely to cause symptoms in immunocompromised infants. In this article, learn all about bronchiolitis. 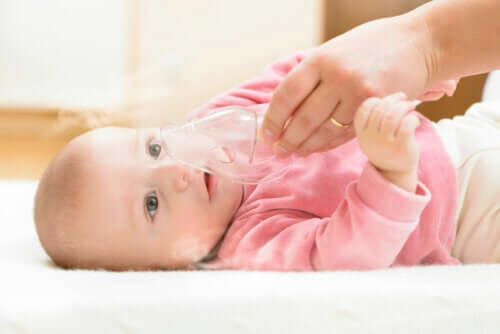 Acute bronchiolitis (AB) is a very common disease in children. Its global annual incidence is about 10%. In other words, one in 10 children under the age of two suffers this condition every year. Furthermore, it’s the most common cause of hospital admissions for respiratory infections in this age group (1-5%).

Although there’s no medical consensus on the definition of bronchiolitis, it’s usually associated with episodes of difficulty breathing or whistling noise, preceded by the symptoms of a common cold.

If you want to know all about bronchiolitis, we encourage you to keep reading.

All about bronchiolitis: Causes

According to the National Library of Medicine of the United States, bronchiolitis is a common lung infection in small children. From a clinical standpoint, it’s characterized by mucus buildup in the small airways of the lungs (bronchioles). It’s usually caused by a virus.

According to the journal Pediatría Integral (In English: Comprehensive Pediatrics), bronchiolitis occurs in epidemics during the winter and early spring. The most affected population group are young children between three and six months of age. Here are some of the most common causative agents:

A negative single-stranded RNA virus of the paramyxovirus family (Paramyxoviridae) causes 56% of cases of bronchiolitis that require hospital admission. It’s widespread around the world. In fact, experts estimate that almost all children in the world suffer from it before they turn four.

Approximately 70% of infants become infected with RSV in their first year of life. Many of them are asymptomatic.

This is a genus of viruses in the Picornaviridae family. They’re the most common infectious agents in humans (they cause colds). More than 110 serological types are capable of causing symptoms in our species. Although less common than RSVs, rhinoviruses can also cause bronchiolitis in infants.

The MSD Manuals portal states that parainfluenza viruses are classified into four types. Although type 3 is the one that causes the most cases of bronchiolitis, types 1 and 2 can also cause it. Infections caused by parainfluenza are indistinguishable from those caused by RSV. However, they’re usually less serious.

To know more, you should read: “Bronchiolitis in Babies: What Should We Know?”

Although bronchiolitis can affect any child, it’s a lot more common in breastfeeding and immunocompromised children. As the KidsHealth portal states, some of the most common risk factors are the following:

Generally speaking, being a young child is the most relevant risk factor. As we mentioned above, approximately 70% of infants become infected with RSV in their first year of life. However, this doesn’t mean that they’ll suffer from bronchiolitis: only 22% develop symptoms.

All about bronchiolitis: Symptoms

The National Library of Medicine of the United States summarizes some of the most common symptoms of bronchiolitis in children. However, not all children develop them.

Some of them are:

Bronchiolitis usually manifests 24-48 hours after the previous clinical signs. The symptoms usually last 12 days. However, up to 18% of affected infants suffer symptoms for 21 days and 9% of them for a month.

As the sources we cited above state, loss of respiratory capacity in newborns can be fatal. If your child has symptoms of bronchiolitis and you notice that their skin is bluish (cyanosis), you need to take them to a doctor right away. Cyanosis indicates a lack of oxygen.

Pauses in breathing, dehydration, and low blood oxygen levels are other clinical signs that indicate that the bronchiolitis is severe. In most cases, those symptoms only occur in premature babies or in those with other illnesses.

According to the specialized portal Neumoped, no drug can help treat bronchiolitis. As it’s a viral disease, doctors hope that the infant’s immune system will be able to fight it on its own. Most cases are mild and don’t require medical attention.

We need to emphasize that treatment with antibiotics will be futile. In fact, this could worsen the clinical picture, as it could strengthen the bacterial strains that live inside the infant. But the approach changes drastically in admitted children.

When an infant is admitted for bronchiolitis, doctors focus on helping them regain a normal breathing rhythm. To do this, they apply oxygen (30-40%) through a nasal cannula or face mask to maintain their oxygen saturation levels at 90% or more. The most severe cases will require endotracheal intubation.

Most cases are treated at home with patience and dedication. Although you can’t help your child fight the disease, you can manage their symptoms with a series of very simple actions. These include the following:

This article may interest you: 5 Natural Remedies to Reduce Bronchitis Symptoms

A common disease that typically resolves on its own

As we mentioned throughout this article, bronchiolitis is an extremely common disease in infants. Therefore, there’s no need to worry if your baby suffers from it. Most cases resolve on their own. Thus, just be patient and follow some home care guidelines to make your child more comfortable.

In any case, if you notice any of the clinical signs we mentioned in the “Possible complications” section, you must take your child to the emergency room as soon as possible. If your child’s breathing capacity is compromised, their life could be in danger.