Aerophagia is a digestive disorder that results from taking in too much air while eating. The symptoms are relatively common in children, which is why the condition is commonly linked to infant colic. 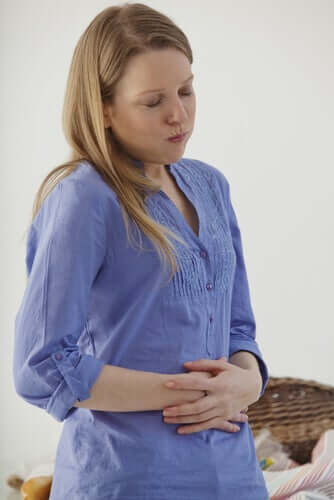 Aerophagia symptoms are the result of excessive intake of air in the digestive tract, especially during meals. The term means “air eating.” It’s a minor digestive disorder. However, it often produces much discomfort. In fact, it’s often responsible for the upper air release that’s commonly known as belching (or burping). However, it’s important not to confuse with gastroesophageal reflux, which has similar symptoms.

Aerophagia can aggravate in the presence of other digestive problems, such as dyspepsia, or abdominal swelling. In children, aerophagia is relatively common and is commonly linked to infant colics.

The causes of Aerophagia

Normally, aerophagia is a consequence of an inadequate diet. Usually, it’s related to the excessive consumption of soft drinks, sugary drinks and other foods such as sweets, breadcrumbs, and chewing gum. It could even have its origin in bad eating habits during your meals, such as eating too fast. This is because it favors the entry of a large amount of air into the digestive tract.

It can also result from anxiety problems, such as stress. So, from a pathological perspective, it’s common in people who don’t properly coordinate the functions of swallowing and breathing. This is frequent in people with anxiety.

Aerophagia manifests through a feeling of heaviness in the stomach, a sensation of bloating, and other digestive problems. Belching, along with flatulence, is how we relieve digestive discomfort.

Symptoms of aerophagia include:

You may also be interested: Drinks That Aggravate Your Stomach the Most

Professionals establish a diagnosis when belching becomes repetitive and annoying, and it happens several times a week. Also, they check the amount of air ingested. The fundamental part of diagnosis is to rule out organic pathologies such as diseases of the upper digestive tract, intestinal malabsorption of carbohydrates, bacterial overgrowth and alterations in motility, among others.

You should maintain a proper diet to prevent aerophagia. Also, chew slowly and avoid certain foods that are conducive to inflammation, such as soda, candy or chewing gum, among others. If the swelling is due to stress, try to relieve your anxiety by following an appropriate treatment or reduce it with regular sports and relaxation activities. The symptoms of aerophagia usually disappear spontaneously once you treat the causes responsible for the disorder.

Finally, it’s important to highlight that treatment will include a variety of measures to consider: